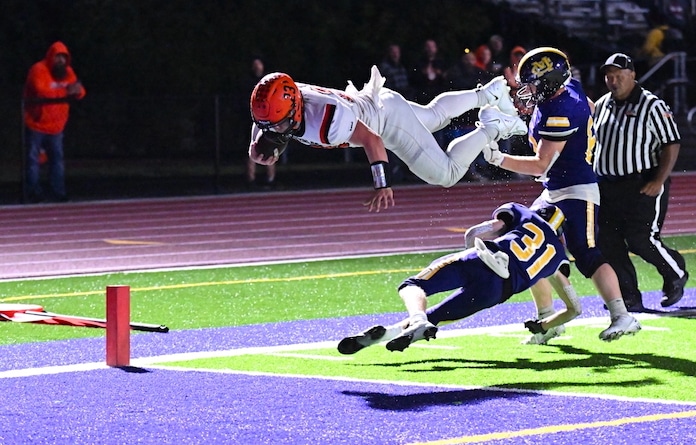 It was a good Friday night for local high school football teams, with Waterloo, Columbia, Dupo and Red Bud all posting wins.

Waterloo improved to 4-1 on the season in impressive fashion, rolling to a 40-0 victory at Civic Memorial.

A bad snap on the punt following Civic Memorial’s opening drive gave the Bulldogs the ball on the four yard line, and Evan Davis cashed in with a short rushing touchdown early on for the Bulldogs.

It was the first of three TDs for Davis on the night. He rushed for 90 yards. Waterloo’s Koby Osterhage also got into the act, rushing for 102 yards and two scores.

That was more than enough scoring for Waterloo, as the Bulldogs defense did not surrender a point. Waterloo finished with three interceptions, two fumble recoveries and seven sacks on the night.

Osterhage had two sacks and Gavin Lich recorded an interception and fumble recovery.

Another shutout took place Friday night in Columbia as the Eagles blanked Freeburg, 24-0.

Brennan Weik got the scoring going on a 21-yard pass reception from quarterback Dominic Voegele to put Columbia up 7-0 in the final minute of the first quarter.

In the second quarter, Voegele scored on a three-yard run to give the Eagles a 14-0 edge going into halftime.

Voegele started off the second half in style with a 73-yard TD run to put the Eagles up comfortably at 21-0. He added a 33-yard field goal in the fourth quarter.

For the night, Voegele rushed for 149 yards and threw for 104 yards.

Dupo was leading late in the fourth quarter until Carlyle scored a touchdown and converted the two-point try to take a 28-26 advantage with just 1:05 remaining.

Red Bud rolled to a 45-0 win over Sparta on Friday night. The Musketeers have outscored opponents 164-38 this season.