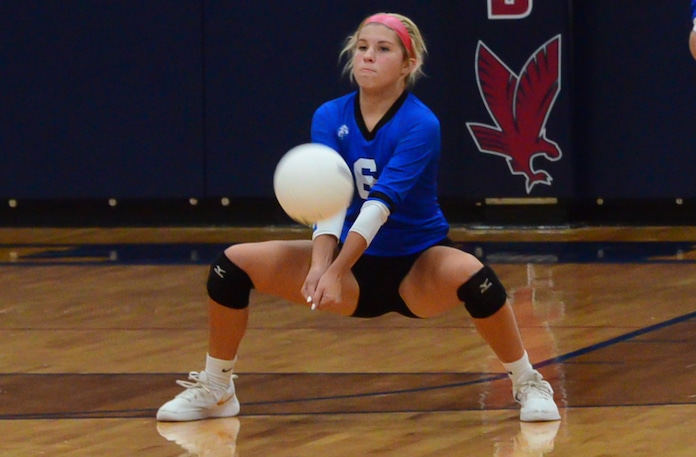 The temperature inside the gym was about as hot as the host Gibault volleyball team has been playing of late entering Monday’s contest against Monroe County rival Columbia.

The Eagles withstood an early onslaught by the Hawks, however, and came back from down 20-15 to win the first set 25-22 before taking the second set 25-12.

Toenjes leads the Eagles this season in points (97) and assists (140).

Columbia plays Thursday at Freeburg and hosts Collinsville on Monday.

With Monday’s loss, Gibault (11-4) had its nine-match winning streak snapped. Avery Gilpin had 10 kills for the Hawks against Columbia.

Josie Briggs is tops in both points and kills for the Bulldogs so far this fall.

Valmeyer (14-6) went 3-2 at the always competitive New Berlin Pretzel Classic over the weekend.

The Pirates downed West Central, Athens and Carlinville but lost to Augusta Southeastern and Springfield Southeastern.

Miller leads the team this season with 139 kills and 55 blocks. Krekel leads with 265 assists. Mia McSchooler leads with 121 points and 187 digs. Markee Voelker has 132 kills.

Kaylyn Woods is tops on the team this season in points, kills and digs.