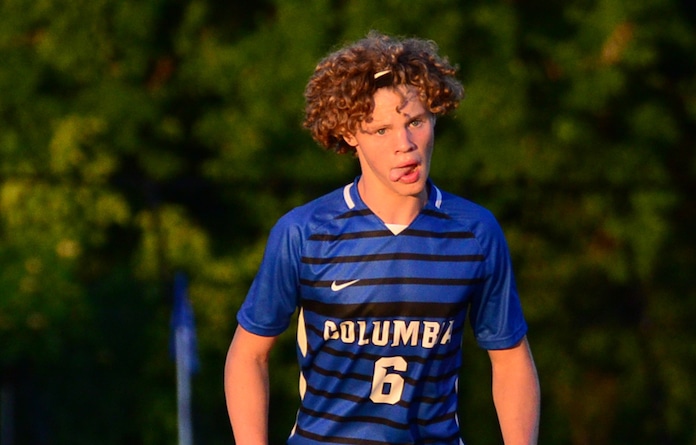 The Eagles got a second half goal from Jack Steckler to edge Gibault at Oerter Park last Tuesday, 1-0.

Andy Altes made nine saves in net for the Hawks.

On Thursday, Columbia posted a 2-1 victory at Freeburg. Cam Ellner and Micah James recorded the goals for the Eagles in that win.

On Monday, the Eagles feasted on Wood River, winning 15-0. Danny Repp finished with four goals and two assists, Steckler netted a hat trick with one assist and Ellner added a goal and six assists.

Steckler leads Columbia in scoring this season with 13 goals and two assists, followed by Ellner with five goals and 14 assists.

Columbia played Tuesday at Salem, competes in the Chatham-Glenwood Tournament this weekend, hosts Highland on Monday and plays at rival Waterloo this coming Tuesday.

On Monday, the Bulldogs dropped a 4-0 match at Belleville West.

On Thursday, Waterloo dropped a hard-fought 2-1 contest against Mascoutah. Caeden Wille notched the goal for the ‘Dogs on an assist from Schwehr.

Last Tuesday, Waterloo came up on the short end of a 3-2 outcome at Triad despite two more goals from Wille and two more assists by Schwehr.

Wille, a sophomore, leads the ‘Dogs in scoring with 13 goals and three assists this season.

Gibault (4-5) had dropped five straight to tough opponents after starting the season 3-0.

The Hawks changed that Tuesday at Mater Dei, winning 4-0. Owen Mechler scored twice for the Hawks.

Gibault hosts Granite City on Thursday before playing Friday at Freeburg and Monday at Webster Groves.

Zachary Tayon leads the Hawks with four goals this fall.

On Monday, Valmeyer dropped a 7-1 match at Lebanon. Voelker scored the goal for the Pirates on an assist from Oggero.

Mason Eschmann leads Valmeyer in scoring this season with eight goals and three assists, followed by Oggero at six goals and five assists and Voelker at five goals and two assists.

Valmeyer hosts Wesclin on Thursday and Maryville Christian on Friday before playing Monday at Wesclin.