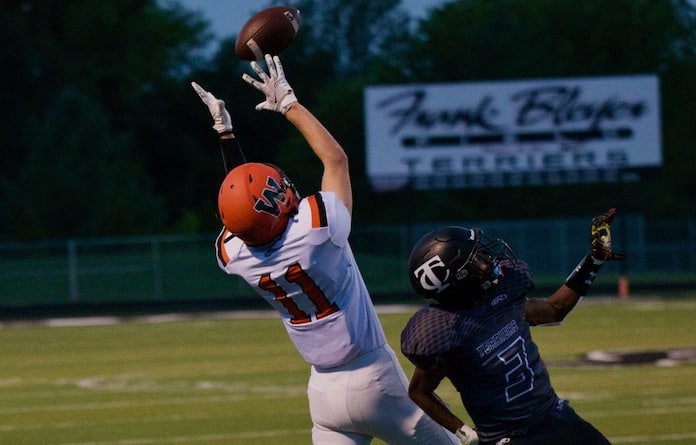 A powerful rushing attack paired nicely with an opportunistic defense to give the Waterloo High School football team a road victory at Carbondale on Friday night.

The Bulldogs ran for more than 300 yards and recorded five interceptions in the 38-14 win over the Terriers.

“We were able to come out and stop them, and then run some power football at them,” Waterloo head coach Dan Rose said.

Leading the way on the ground was running back Evan Davis, who carried the ball 21 times for 173 yards and four touchdowns.

He put Waterloo on the board with a short TD run at 9:59 of the first quarter. Following the first interception of the night for the ‘Dogs, Waterloo drove all the way down to the one yard line but Carbondale kept them out of the endzone.

After Carbondale turned it over on downs, Waterloo added to its lead with Lexi Stephens’ first career field goal from 27 yards out at 9:58 of the second quarter for the 9-0 lead.

Davis ran it in from 18 yards out to extend Waterloo’s first half lead to 15-0 at 5:48 of the second quarter. An Ethan Horvath interception was turned into yet another Davis rushing score with 3:46 left before halftime.

To top off the first half with an exclamation point, Wyatt Fink intercepted a Carbondale pass and took it 77 yards to paydirt to give the Bulldogs a 28-0 lead.

Davis added a fourth quarter rushing TD to cap off Waterloo’s scoring on this night.

Other key offensive contributors for the ‘Dogs were running back Jack McFarlane (87 yards rushing) and quarterback Aidan Morrow (71 yards passing).

“We were able to impose our will off the bat. From there, our defense took the game over,” Rose said.

In addition to the five INTs, Waterloo’s defense registered four sacks on the night.

It was the third straight game that Waterloo’s defense picked up a score.

The Bulldogs (2-1) face a tall order this Friday, traveling to unbeaten Mascoutah in a key Mississippi Valley Conference game. The Indians have outscored opponents 131-33 thus far this season.

“They are a good, athletic football team,” Rose assessed. “Their quarterback is a great athlete.”