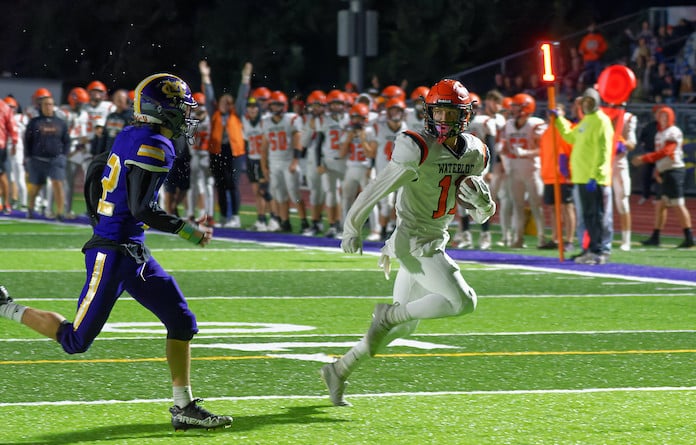 Waterloo improved to 4-1 on the high school football season in impressive fashion, rolling to a 40-0 victory at Civic Memorial in a Mississippi Valley Conference clash.

A bad snap on the punt following Civic Memorial’s opening drive gave the Bulldogs the ball on the four yard line, and Evan Davis cashed in with a short rushing touchdown early on for the Bulldogs.

It was the first of three TDs for Davis on the night. He rushed for 90 yards and dazzled the crowd with acrobatic leaps over defenders and dives into the endzone.

Waterloo’s Koby Osterhage also got into the act, rushing for 102 yards and two scores.

Waterloo quarterback Aidan Morrow rushed for a TD in addition to going 4-for-8 passing for 48 yards and a TD pass.

That was more than enough scoring for Waterloo, as the Bulldogs defense did not surrender a point.

Osterhage had two sacks and Gavin Lich recorded an interception and fumble recovery.

Dane Barnes and Cole Dilley had the other interceptions for Waterloo. Aiden Hunter had the other fumble recovery in addition to recording one of the sacks.

Waterloo has outscored its opponents so far this season to the tune of 123-43, bolstered by a hard-hitting and opportunistic defense that complements a powerful, clock-chewing running attack.

Davis has rushed for 667 yards and eight TDs – averaging 6.5 yards per carry – in addition to having 180 yards receiving and another score.

The Bulldogs welcome MVC foe Jerseyville to town this Friday night for their homecoming game. Jerseyville is 2-3 on the season, having lost last week at Mascoutah, 49-14.

Waterloo will have to continue its strong line play Friday, as Jerseyville has some large linemen to contend with.