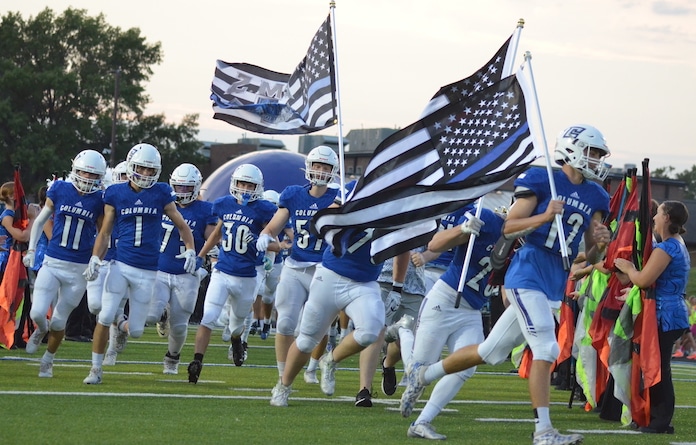 The Columbia High School football squad improved to 4-1 on the season with a 24-0 blanking of Cahokia Conference rival Freeburg at home on Friday.

Brennan Weik got the scoring going on a 21-yard pass reception from quarterback Dominic Voegele to put Columbia up 7-0 in the final minute of the first quarter.

In the second quarter, Voegele scored on a three-yard run to give the Eagles a 14-0 edge going into halftime.

Voegele started off the second half in style with a 73-yard TD run on the first play from scrimmage to put the Eagles up comfortably at 21-0.

He added a 33-yard field goal in the fourth quarter.

For the night, Voegele rushed for 149 yards and threw for 104 yards.

Voegele, a University of Kansas baseball commit, has 550 total yards rushing and six TDs this season to go along with 473 passing yards and four TDs plus a return TD this season.

“Not giving up big plays was the key,” Columbia head coach Scott Horner said of Friday’s win. “They have a super athlete at QB (Cole Stuart) and a shifty running back (Caleb Loftus) and keeping those two in check was a huge part of it.”

Horner added that Voegele’s long TD run to start the second half changed Freeburg’s approach to the rest of the contest.

“Scoring on the first play from scrimmage to start the third quarter forced them to maybe do some things on offense that they didn’t ordinarily want to do,” Horner said.

It was Columbia’s second shutout of the season, having downed rival Waterloo, 9-0, earlier this fall.

The Eagles play this week at Wood River, which has caught the attention of the metro east with a 4-1 start.

The Oilers lost 21-6 at Breese Central this past Friday, but will be looking to bounce back with this week’s home game against the Eagles.

The Oilers are led on offense by senior running back Seth Slayden, a multi-sport standout who has turned in some impressive performances already this fall.