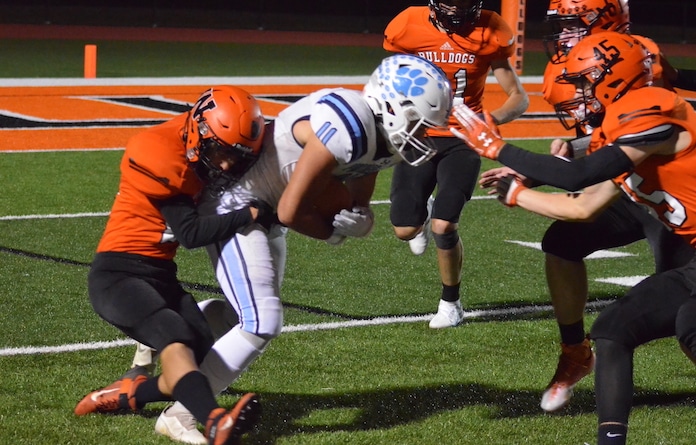 The Waterloo High School football team was clicking on all cylinders in a 42-6 victory Friday night over Mississippi Valley Conference foe Jerseyville for its homecoming game.

Bulldogs senior running back Evan Davis, who was crowned homecoming king at halftime, rushed for 151 yards and two touchdowns. His backfield mate, junior Koby Osterhage, rushed for 97 yards and a score in addition to blocking a punt and recovering another blocked punt for a TD.

In all, Waterloo blocked three punts on the night, recovering two for TDs. On defense, Wyatt Fink, Aiden Hunter and Max Mitchell each recorded sacks.

Waterloo got on the scoreboard first courtesy of a 31-yard TD run by Osterhage at 6:20 of the opening quarter. That came after Waterloo’s defense stuffed Jerseyville on fourth down and one.

Osterhage blocked a Jerseyville punt, giving the Bulldogs the ball at midfield. Following a 26-yard pass play from Waterloo quarterback Aidan Morrow to tight end Patrick O’Donnell, Davis closed out the first quarter with a 23 yard TD run in the final minute.

A punt blocked by Waterloo’s Curtis Crossen in the end zone allowed Osterhage to recover for another Bulldogs TD with 5:20 to go in the first half.

After being crowned homecoming king at midfield during halftime, Davis ripped off a 33-yard TD run at 8:25 of the third quarter.

Following a Jerseyville score on a lost Waterloo fumble, Morrow ran it in from 11 yards out to put Waterloo comfortably ahead at 35-6 with just more than six minutes remaining in the contest.

Gavin Lich provided one last highlight on the night, recovering a blocked punt in the end zone to put Waterloo up 42-6 with 1:30 remaining.

Morrow was 4-for-4 passing for 61 yards on the night with no turnovers.

With the win, Waterloo (5-1) becomes playoff eligible. Next Friday, the Bulldogs will host a high-flying Highland team that is also 5-1. Highland defeated Civic Memorial to the tune of 65-0 on Friday.

Wood River (5-1) led 14-0 at halftime and held on late. The Eagles had trouble slowing down the running game of the Oilers early on, as Wood River scored on runs of eight and 31 yards in the first half.

Columbia got back in the game courtesy of a Dominic Voegele TD run late in the third quarter, but Wood River answered with a 10-yard TD pass play in the middle of the fourth quarter.

Voegele had 10 carries for 98 yards and two TDs in addition to going 11-for-24 passing for 102 yards and an interception.

Nick Gantner had 112 yards rushing and three TDs for the Musketeers.

Red Bud plays next Friday at Wesclin. Dupo plays at Chester next week.