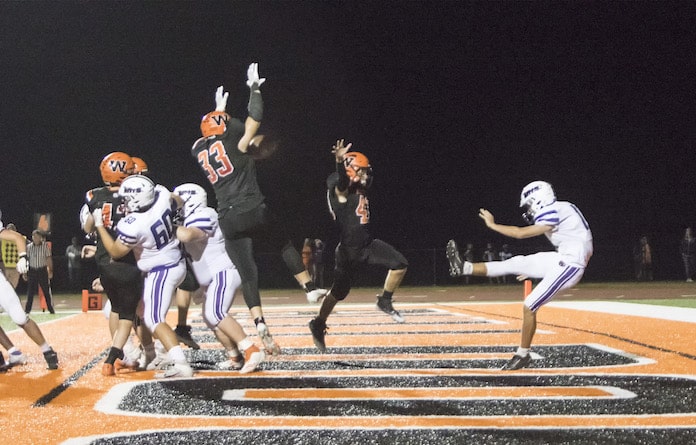 The Bulldogs lost 42-21 to the Indians last year and Mascoutah won 49-26 over Columbia to open the season en route to its 3-0 start.

But Waterloo was up to the challenge this time, winning 35-18 to improve to 3-1 on the season.

“We were able to impose our will a little bit,” Waterloo head coach Dan Rose said.

The Indians put together a solid scoring drive early, cashing in on a 29-yard pass play to go up 6-0.

That was the score after one quarter.

The Bulldogs started to get their running game going, led by senior workhorse running back Evan Davis. Coming off a 30-carry, 300-yard performance the week prior, Davis put his team on the board with a seven-yard touchdown run at 3:36 of the second quarter. His one-yard TD run made it 14-6 at the end of the first half.

“Our game plan is to control the ball. They can’t score if they don’t have the ball,” Rose said. “If you have the ball and move it along, those first downs become important as the game goes on.”

Neither offense could score in the third quarter, but Waterloo’s special teams did.

Maxwell Mitchell blocked a Mascoutah punt from their own end zone and teammate Gavin Lich recovered it for a Bulldogs TD in the final minute of the quarter to make it 21-6.

“That special teams score was just a dagger to the heart,” Rose said.

Lich recovered another fumble on defense to give the ‘Dogs the ball on Mascoutah’s 38 yard line early in the fourth quarter. Davis made the Indians pay, running it in on the very next play to give Waterloo the 28-6 lead.

Mascoutah committed 15 penalties and turned the ball over three times on the night.

Rose said some of those penalties were due to Mascoutah’s offensive line playing tight and jumpy due to Waterloo’s physicality.

Following an Indians TD, Bryce Reese rumbled 36 yards for another Waterloo rushing score with 3:39 remaining in the contest.

Davis – last week’s Republic-Times Athlete of the Week – rushed for 179 yards on 32 carries in addition to his three TDs behind Waterloo’s strong offensive line.

“Our O-line was strong and our backs ran really well,” Rose said. “Our defense was also getting us the ball in easier situations, so it goes hand-in-hand.”