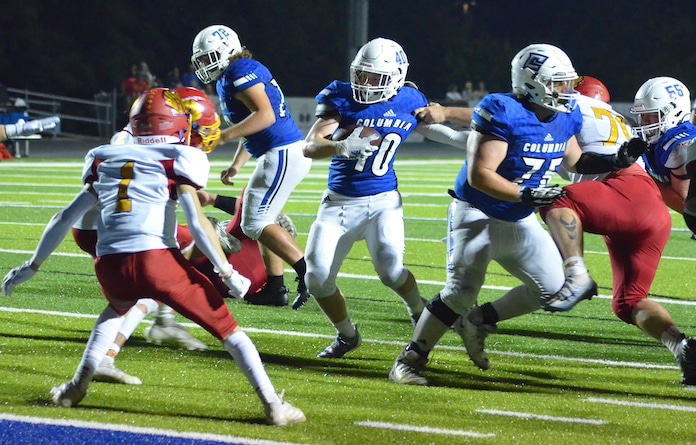 Friday’s football contest between Columbia and Roxana featured enough twists and turns to qualify as a soap opera – complete with dramatic ending – as the Eagles outlasted the Shells, 28-27.

The home crowd Eagles faithful were shell-shocked early, as Roxana came in and built a 21-6 lead late in the first half. Fortunately, Columbia’s lone scoring drive to that point was aided by a 15-yard unsportsmanlike conduct penalty on the Shells.

A 15-yard pass by Columbia quarterback Dominic Voegele to receiver Nick Janik at the goal line was initially ruled incomplete, as a Roxana defender jarred the ball loose. It appeared Janik had completed the catch before the defender’s hit, however, and the referees huddled together to discuss the play. In the end, it was ruled a touchdown. Voegele ran it in for a two-point conversion, cutting Roxana’s lead to 21-14 at halftime.

A long Eagles drive was capped off by Voegele with a one-yard run, and he ran in the two-point conversion again to put Columbia up 22-21 with less than two minutes left in the third quarter.

But Roxana wasn’t done just yet. The Shells put together a drive of their own, which ended with a short TD run that put them up 27-22 with just under five minutes remaining in regulation.

In desperation mode, Columbia drove to Roxana’s 35 yard line only to turn the ball over on downs with just two minutes left.

Needing a stop, the Eagles defense did just that, forcing a Roxana punt. This set the stage for an exciting finish.

Roxana punted it to Voegele, who received a key block from a teammate and bounced to the right sideline, fending off Shells tacklers on his way to a 67-yard punt return TD at 1:21.

Voegele put together another all-around performance.

In addition to his punt return TD and two two-point conversion runs, he finished with 79 yards rushing and a score plus 166 yards passing and a score. He also caught an 18-yard pass from his younger brother, Mason Voegele.

The Columbia defense was led by Mason Voegele and Brandon Jackson with eight tackles and two assists each. Mason Schnable had seven tackles and four assists.

“Our execution offensively was less than desired, forcing our defense to be on the field more than we had hoped,” Columbia head coach Scott Horner said after the game. “In addition, at times, we didn’t tackle well and they have some big strong backs who run hard. In the end, we found a way and Dom obviously was doing Dom-like things and he bailed us out. We will have to play much better this week to best Freeburg.”