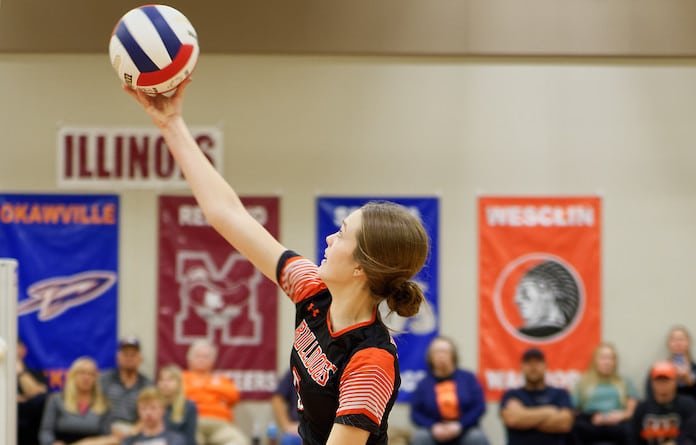 Early October signals that the end of the regular season is near for high school volleyball teams, meaning it’s time to prepare for the playoffs.

Waterloo lost several key players from last year’s team that made the sectional final, but that hasn’t stopped it from winning 17 of its first 21 matches of 2022.

In fact, Waterloo has only lost two matches since August. Key players for the Bulldogs have been points and kills leader Josie Briggs and top blocker Emma Day.

The Bulldogs will face a tough test this Thursday as they travel across town to take on rival Gibault (15-10).

The Hawks are coming off an 0-5 showing against top competition this past weekend at the Belleville East Tournament.

The Hawks are led this season by Lucy Range in points, aces and assists and Abby Grohmann in kills.

Columbia (17-9) went 2-3 at the Belleville East tourney over the weekend.

The Eagles won in three sets against Quincy and downed Gibault by the score of 25-21, 25-18. Karsen Jany had seven kills, three blocks and six points to lead Columbia past Gibault.

Kate Toenjes leads the Eagles this season in points and assists; Jany is tops in kills and blocks.

Valmeyer (18-7) won three more recent matches as it sets its sights on a playoff run.

On Thursday, the Pirates won 25-8, 25-9 over New Athens. Brooke Miller had 11 kills and Jayna Krekel dished out 25 assists

Mia McSchooler is tops on the team this season in points and digs; Miller leads in kills and blocks.