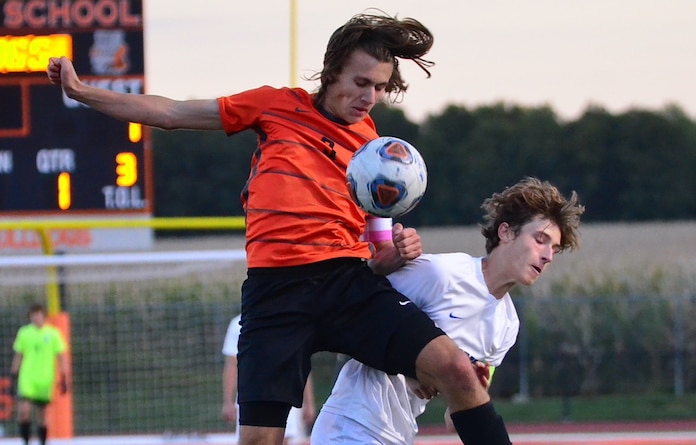 Local soccer rivals Waterloo and Columbia locked up last Tuesday on the Waterloo High School turf, battling to a 2-2 tie.

Danny Repp scored his second goal of the match for the Eagles with just 30 seconds remaining to knot the score.

Waterloo’s goals were scored by Caeden Wille and Grant Eugea.

On Thursday, the Eagles lost 4-0 to Wheaton Academy. That was followed up by a 1-0 win Friday over Normal University High and a 2-1 victory Saturday over Arlington Heights St. Viator. Micah James netted the goal in Friday’s win and Jack Steckler scored both goals in Saturday’s win.

On Monday, the Eagles lost 4-1 to Marquette. Steckler scored again for Columbia. On Tuesday, the Eagles won 2-0 over Roxana. Liam Bivins and Hayes Van Breusegen scored for the victors.

The Eagles open Class 1A Freeburg Regional play Oct. 12 against the winner of Wesclin vs. Salem.

Steckler leads Columbia in scoring this season with 21 goals and six assists, followed by Repp with 15 goals and eight assists.

Waterloo (7-9-2) followed the tie against Columbia with an 8-0 win over Maryville Christian on Thursday. Grant Eugea notched two goals and an assist. Wille added a goal and two assists.

On Monday, Waterloo dropped a 2-0 match to Collinsville.

Waterloo hosts Triad on Thursday and play at Marquette on Monday.

Wille leads Waterloo in scoring this season with 15 goals and six assists. Henry Huels has seven goals and four assists.

On Thursday, Gibault lost 4-1 to Kirkwood. Zachary Tayon netted the goal for the Hawks.

Tayon leads the Hawks in scoring this season with six goals and two assists.

Valmeyer picked up a 5-2 victory over Carlyle on Thursday. Mason Eschmann scored all five goals for the Pirates, who host Valley Park this Wednesday before going to battle in the regional at Gibault.

Eschmann has 14 goals and three assists to lead Valmeyer in scoring. Vincent Oggero has nine goals and seven assists.