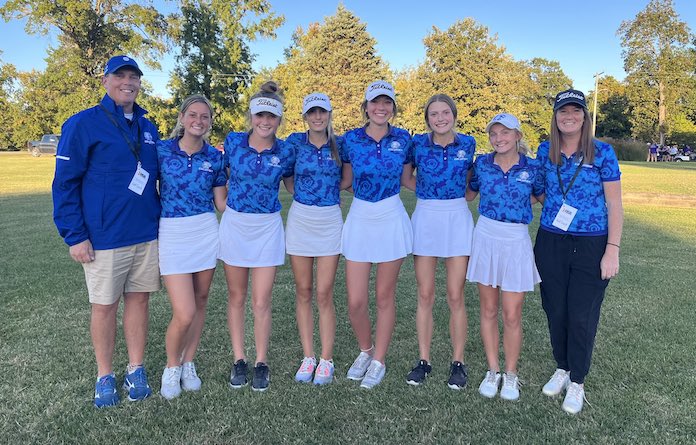 Monroe County will be well-represented this weekend in IHSA state golf tournaments taking place up north.

In girls golf, Columbia advanced to state as a team by virtue of a third place showing at Monday’s Class 1A Salem Sectional. The Eagles, who shot a team score of 349, were led by Mae Descher in 15th place with an 84, Avery Arendell in 18th place with an 86 and Annie Schrader in 23rd place with an 87.

The Waterloo girls will be represented at state by Reese Kite, who placed seventh at the sectional with a 78, and Calli Smith, who shot an 84 for 15th place.

The Bulldogs placed seventh as a team with a score of 386.

The Waterloo girls won the IHSA Class 1A Breese Central Regional at Governor’s Run in Carlyle on Thursday with a team score of 335.

Kite shot a 69 to win first place overall at the regional.

The Columbia girls placed second as a team with a 355 to also qualify for sectional play.

In boys golf, four locals will be playing in state tourneys.

In Class 1A, Gibault’s Cohen Jackson shot an 81 for 11th place at Monday’s Effingham Sectional to advance to state.

Gibault placed fifth out of 12 teams at the sectional. Only the top three teams qualify for state.

In Class 2A, Columbia’s Jacob Hall and Waterloo’s Jaden Smith qualified for state.

Hall placed fifth with a 74 and Smith placed sixth with a 75 at Monday’s Waterloo Sectional played at Acorns Golf Links.

Waterloo placed seventh as a team at the sectional.

Waterloo placed second with a score of 331 to Althoff’s 312 at last week’s Mascoutah Regional to make the sectional. The Bulldogs were led by Smith with a 76 for third place and Brady Schmidt with an 81 for fifth place.

Columbia didn’t advance as a team to the sectional round, but golfers Hall and Jimmy Vonderhaar both shot 81s to advance to Monday’s sectional.