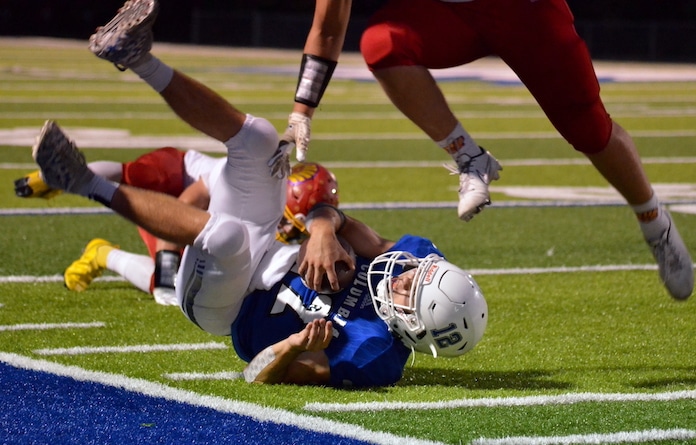 “Missed opportunities and poor execution. They were more aggressive than us and we couldn’t respond,” Columbia head coach Scott Horner assessed.

The Eagles had trouble slowing down the running game of the Oilers early on, as Wood River scored on runs of eight and 31 yards in the first half.

Columbia got back into the game courtesy of a Dominic Voegele touchdown run late in the third quarter, but Wood River answered with a 10-yard TD pass play in the middle of the fourth quarter.

Voegele had 10 carries for 98 yards and two TDs in addition to going 11-for-24 passing for 102 yards and an interception.

Seth Slayden carried the ball 31 times for 177 yards and a TD for Wood River, which finished with 289 total yards on the ground against the Eagles. Slayden also intercepted a pass on defense.

Salem enters Columbia’s homecoming game having lost four straight, the latest being a 49-12 defeat at the hands of Breese Central.

Nick Gantner had 112 yards rushing and three TDs for the Musketeers.

Dupo quarterback Deegan Prater was 15-for-28 passing for 146 yards and three interceptions. He also ran for 50 yards.

Logan Stevens made eight catches for 74 yards for the Tigers.