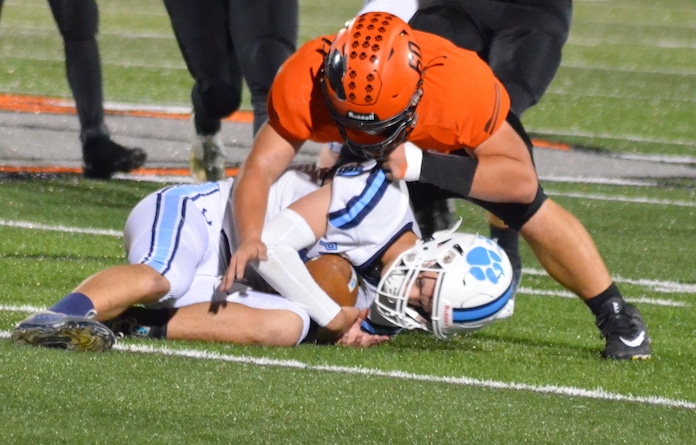 The Waterloo High School football team was clicking on all cylinders in a 42-6 victory Friday night over Mississippi Valley Conference foe Jerseyville for its homecoming game.

Bulldogs senior running back Evan Davis, who was crowned homecoming king at halftime, rushed for 151 yards and two touchdowns.

His backfield mate, junior Koby Osterhage, rushed for 97 yards and a score in addition to blocking a punt and recovering another blocked punt for a TD.

In all, Waterloo blocked three punts on the night, recovering two for TDs. On defense, Wyatt Fink, Aiden Hunter and Max Mitchell each recorded sacks.

Waterloo got on the scoreboard first courtesy of a 31-yard TD run by Osterhage at 6:20 of the opening quarter. That came after Waterloo’s defense stuffed Jerseyville on fourth down and one.

Osterhage blocked a Jerseyville punt, giving the Bulldogs the ball at midfield. Following a 26-yard pass play from Waterloo quarterback Aidan Morrow to tight end Patrick O’Donnell, Davis closed out the first quarter with a 23-yard TD run in the final minute.

A punt blocked by Waterloo’s Curtis Crossen in the end zone allowed Osterhage to recover for another Bulldogs TD with 5:20 to go in the first half.

After being crowned homecoming king at midfield during halftime, Davis ripped off a 33-yard TD run at 8:25 of the third quarter.

Following a Jerseyville score on a lost Waterloo fumble, Morrow ran it in from 11 yards out to put Waterloo comfortably ahead at 35-6 with just more than six minutes remaining in the contest.

Gavin Lich provided one last highlight on the night, recovering a blocked punt in the end zone to put Waterloo up 42-6 with 1:30 remaining.

Morrow was 4-for-4 passing for 61 yards on the night with no turnovers.

“There’s always still some mistakes to clean up here and there, but I was really happy with the effort and execution,” Waterloo head coach Dan Rose said of his team’s latest win. “We have to keep getting better each week.”

Rose added that his team’s overall health has been key, explaining that the depth allows several players to focus on one side of the ball rather than multiple positions.

As for the punt blocks, Rose said that is a testament to “getting the right people in the right spots.”

Waterloo has outscored its opponents this season to the tune of 165-49.

This Friday, the Bulldogs host a high-flying Highland team that is also 5-1. Highland defeated Civic Memorial to the tune of 65-0 this past Friday.

“We’re going to have to play a really good game to beat them,” Rose said of Highland. “It’s basically a Mississippi Valley Conference title game.”

Highland’s only loss this season came by three points at large school Edwardsville on Sept. 2.

Highland, which averages nearly 50 points per game, has two linemen listed at over 300 pounds.