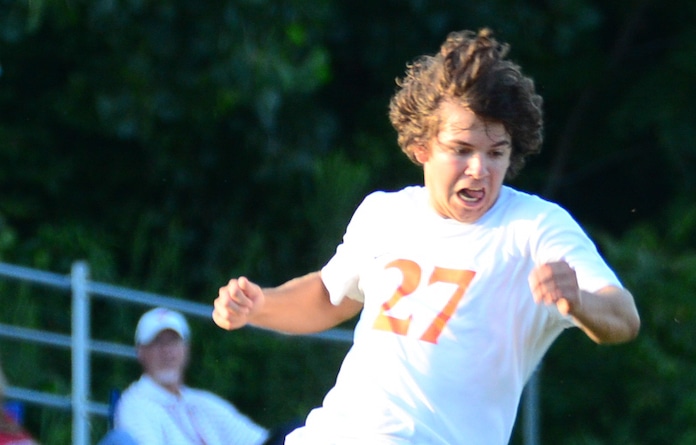 With all of the local squads at or slightly below .500, the high school boys soccer schedule is starting to ramp up.

On Thursday, the Bulldogs won 7-1 at Jerseyville. Caeden Wille notched two goals and an assist and Ethan Gardner added two goals for Waterloo.

Grant Eugea and Henry Huels each added a goal and assist in the win.

Last Tuesday, Waterloo dropped a 5-2 contest to Civic Memorial. Eugea and Gardner notched the goals for the ‘Dogs, who played at conference foe Triad on Tuesday, falling 3-2 despite two more goals from Wille.

Wille leads Waterloo in scoring so far this season with 12 goals and three assists.

Jack Steckler notched a second half goal for the Eagles in the win over the Hawks.

On Saturday, the Eagles lost 3-1 at Triad. Micah James notched the only goal for Columbia on an assist from Liam Bivins.

On Thursday, Columbia lost 1-0 to Belleville East as Lancers goalie made 11 saves on the night.

Last Wednesday, Columbia picked up a 3-1 victory over Granite City. James, Jack Steckler and Cam Ellner each scored for the Eagles.

Columbia plays at Freeburg on Thursday before hosting Wood River on Monday.

Steckler leads Columbia in scoring this season with 10 goals. Ellner has three goals and eight assists.

On Saturday, the Hawks dropped a 3-0 match at Belleville East. Jackson Goedeke and Owen Mechler each recorded four shots on the day.

Last Tuesday, Gibault lost 9-0 to Saint Louis University High. Andy Altes made 13 saves in net for the Hawks, who play at Mater Dei this coming Tuesday.

Zachary Tayon leads Gibault with four goals this season, followed by Goedeke and Gavin Kesler with three goals each.

Valmeyer (2-5) lost 6-1 to Wood River on Thursday, with Vince Oggero notching the goal for the Pirates.

Valmeyer hosts Hancock on Wednesday before playing Monday at Lebanon.

Mason Eschmann leads the Pirates this season with eight goals and an assist.