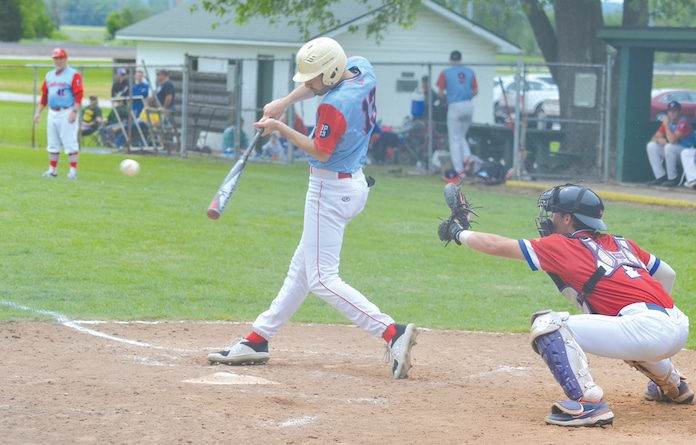 The Valmeyer Lakers won three more games over the weekend to improve to 6-1 on the young Mon-Clair League baseball season.

Valmeyer won 10-6 in 10 innings Saturday over the Southeast Missouri Tropics. The Lakers rallied for three runs in the ninth inning to tie the contest, then plated four in the extra frame to win.

On Sunday, the Lakers swept a doubleheader at home over the St. Louis Spikes.

In the first game, Valmeyer won 12-2 as Rowold went 4-for-4 with four RBIs. Luke Gasser pitched four scoreless innings for the mound victory.

Valmeyer won the second game by the count of 5-0. Trevor Davis, Kenny Otero and Dustin Crawford combined to throw a three-hit shutout. Davis and Riley McCarthy each had two hits.

Rowold is hitting .448 with nine runs in the early going to lead the Lakers, who play a Sunday doubleheader at the Belleville Rockies.

The Waterloo Buds improved to 3-3 on the season after sweeping the Tropics on Sunday.

The second game also went to Waterloo, 13-3. Matt Pay pitched four and two-thirds innings for the win and the Buds got solid offensive efforts from Dobbs and Trey Kueper.

Dobbs went 5-for-5 with two RBIs and three runs. Kueper went 3-for-3 with two triples, a double and two RBIs.

Waterloo battles the Spikes this Friday night before hosting defending league champion Millstadt for two on Sunday at SPPS Field.

Millstadt (2-2) split with Edwardsville on Sunday.

In the first game, the Green Machine lost 8-5 to the Aces. Edwardsville plated three in the top of the seventh and Millstadt could only get one of them back in its last at-bat.

Cal Kossina and Jack Toenjes collected two hits each for the Green Machine.

In the second game, Millstadt busted out the bats in an 11-1 victory. Toenjes continued his hot start by going 2-for-3 with an RBI. Brett Bunselmeyer added a triple and three RBIs.

Evan Spears improved to 2-0 on the season with six strikeouts over five innings pitched for Millstadt.

Toenjes is hitting .429 to pace the Green Machine as they prepare for Sunday’s showdown at Waterloo.