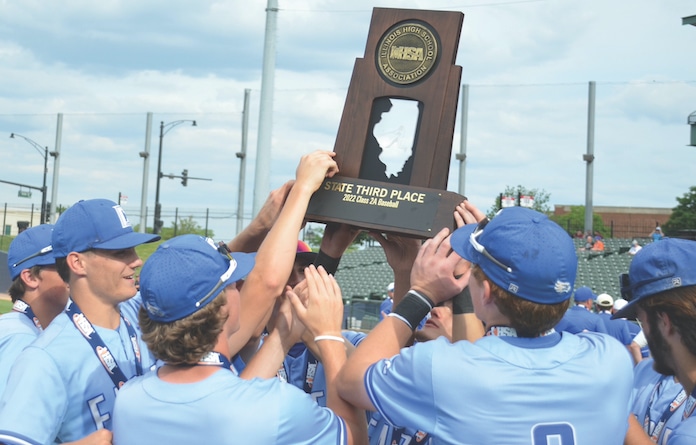 It wasn’t the trophy it had hoped to bring home, but the Columbia High School baseball team ended its season victoriously Saturday at the IHSA Class 2A state tournament at Dozer Park in Peoria to claim third place.

Behind a dominating mound effort from Dom Voegele, the Eagles won 4-1 over Maroa-Forsyth on Saturday. Voegele, a junior righthander, finished with 13 strikeouts and just five hits and one earned run allowed. He also went 1-for-3 with an RBI at the plate.

Jack Steckler’s two-RBI single to left-center in the sixth inning provided breathing room with Columbia clinging to a 2-1 lead.

After Voegele reached on an error to lead off the sixth, Alex Schreckenberg reached on a well-placed bunt single. Logan Mueller reached on a fielder’s choice after pinch runner Aidan Gaither beat the Maroa third baseman to the bag. With nobody out, Steckler delivered.

“Jack’s been working his rear end off for us all season, but in the last two days he’s been in the cage almost to the point of ‘Jack, you’re taking too many cuts in there,’” Columbia head coach Neal O’Donnell said after the game. “But, he’s really been focused these last two days”

Columbia came out in the top of the first inning Saturday and plated two runs. Following a leadoff walk to Kyle McConachie and a stolen base, Voegele singled to drive McConachie home. Steckler reached on an infield single and Lucas Riebeling hit into a fielder’s choice to make it 2-0.

“Coming out in that first inning and scoring some runs, I think it kind of took the pressure off and we were able to close it out there at the end,” O’Donnell said.

After wriggling out of a bases loaded jam in the bottom of the first, Voegele took charge from there. His only real blemish on the day was a home run by Maroa’s Jaxson Grubbs in the third inning.

“Sometimes, I feel like the expectations we have with him are so high that when he doesn’t have an outing like (Saturday), you’re kind of like ‘What happened there?’” O’Donnell said after the third place win. “But games like this, you want Dom on the mound. He’s shown this year that he’s a big game pitcher. I’m excited to have him back for another year.”

Riebeling recorded the final out on the mound with just one pitch after Voegele left due to his 120-pitch total.

O’Donnell said he was glad his team didn’t get down following Friday’s semifinal loss to Joliet Catholic – the eventual Class 2A state champion.

On Friday, Columbia ran into a tough pitcher as Joliet Catholic hurler TJ Schlageter held the Eagles’ offense at bay.

Voegele went 2-for-3 with the team’s only run in Friday’s loss. He led off the fourth inning with a triple and scored on a sac fly to tie the game.

Joliet Catholic answered with three runs in the bottom of the fifth inning, and Columbia was unable to mount a comeback.

“I feel like our whole team gave us great at-bats all weekend,” O’Donnell said.

The Eagles were welcomed home with a parade early Sunday afternoon on Main Street, followed by a reception in the CHS gym.

Playing their final games for the Eagles at state were graduating seniors Mueller, McConachie, Jay Mistler and Jake Steve.

McConachie, who will play at Highland (Kan.) Community College, hit .392 with 43 runs and seven stolen bases.