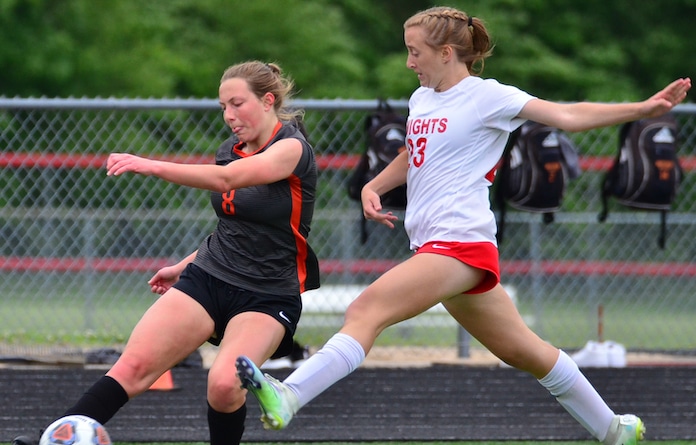 An amazing season for the Waterloo High School girls soccer team came to an end Friday in the Class 2A Triad Sectional championship game against defending state champion Triad.

Following a scoreless first half in which the teams battled evenly, the Knights eventually edged the Bulldogs, 1-0.

Waterloo finished its season with a record of 20-5-1. That win total equals the record for most by the program in a single season.

The Bulldogs were able to stave off strong offensive pressure from the Knights in the first seven minutes of Friday’s match, after which the play leveled out.

With only about 17 minutes remaining in regulation, Triad’s Maddie Hunt capitalized on a loose ball scrum following a corner kick and knocked it in.

Despite a furious effort in the final minutes to score the equalizer, Waterloo was just unable to tie the match.

“We are very proud of the way the girls played,” longtime Waterloo head coach Chad Holden said. “They played hard throughout the game and we had our chances. It was a shame one of the two teams had to lose.”

After falling to Triad back on April 5, the Bulldogs downed the Knights on April 28, 2-0, to end the defending champ’s unbeaten streak that dated back to May 31, 2019.

Richter set a new single-season record for goals with 43 in addition to having 14 assists. Richter’s 100 total points this season make her the only WHS soccer player (male or female) to ever reach that milestone.

“Of course it hurt at the final whistle, but now we have had time to reflect we all know we had a great season,” said Holden, who has 300 career wins as WHS girls soccer coach. “Our seniors will be sorely missed and will be hard to replace, but we do have a good group of girls coming back for next season.”