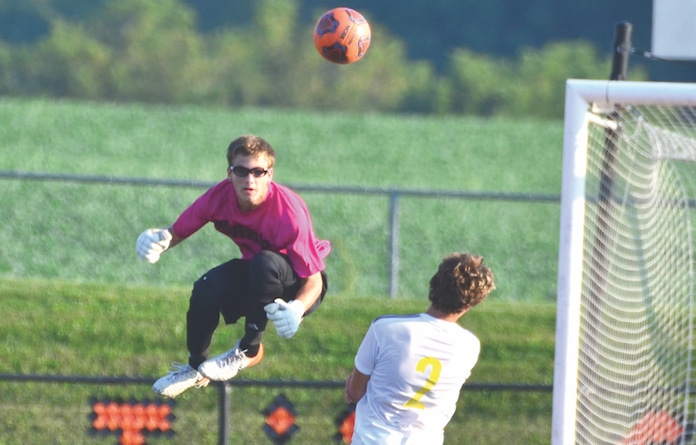 Despite the fact there was no high school soccer team from Monroe County represented at a state tournament for the first time in seven years, talent was on display locally this past fall.

So without further adieu, here’s the Republic-Times All-Local Boys Soccer Team for 2019.

Jonah James, Columbia. A junior forward for the Eagles, James emerged as a consistent scorer this season. He finished with 29 goals and eight assists and was named to the Illinois High School Soccer Coaches Association All-Sectional Team.

Keegan O’Bryan, Columbia. This senior midfielder was a key ingredient for the sectional champion Eagles this fall, recorded nine goals and four assists.

Trevor McClellan, Valmeyer. Returning to the Pirates after missing all of the 2018 season due to injury, McClellan led the team in scoring with 16 goals and four assists to earn all-conference recognition.

Dalton Blanchard, Waterloo. This senior defender finished with three goals and four assists for the Bulldogs.

Brandon Hall, Columbia. A senior, Hall served as a senior anchor of the Eagles defense this fall.

Sam Ward, Waterloo. The senior leadership continues on this list with a goalkeeper who recorded 15 shutouts and a .915 save percentage, which ranked among tops in the entire St. Louis area.

Connor Olson, Gibault. With a big, booming kick and total of 178 saves made, this senior made the IHSSCA All-Sectional Team.

Tate Schilling, Columbia. Playing for his third Monroe County team in three seasons, Schilling shined in the postseason for the Eagles. For the season, he notched eight goals and six assists.

Matt Madlinger, Columbia. This senior midfielder scored three goals and assisted on 10 others this season.

Helio Neta Franca, Gibault. This midfielder contributed two goals and an assists for the Hawks.

Kyle Stewart, Waterloo. This junior defender notched four goals and three assists for the Bulldogs and will look to improve for the 2020 season.

Aidan Brown, Waterloo. Another strong defender for the Bulldogs, this sophomore provides more hope for the future.