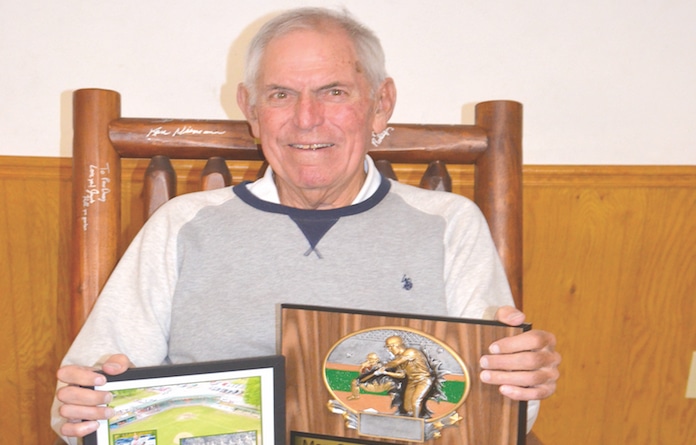 With its largest ever awards banquet audience on hand, the Mon-Clair Baseball League on Sunday presented its highest honor to longtime Valmeyer Lakers manager Denny “Boog” Pieper at Turner Hall in Columbia.

Pieper, who has played in the league since 1962 and has served as manager for 50 years, was the recipient of the league’s Lifetime Achievement Award. He became the fourth person to receive this honor in the league’s long history.

Several current and former players of Pieper were among the hundreds in attendance.

“I thank you for not playing any walk-up music. Because I don’t want to hear the ‘Baby Shark’ anymore,” Pieper joked at the start of his acceptance speech.

Pieper, who has won seven league titles and five Valmeyer Midsummer Classic championships since he became manager of the Lakers in 1970, said his team has had 12 ERA winners and six batting champions over the years.

A Mon-Clair League Hall of Fame inductee in 1993, Pieper began his playing days in 1962 as a high school freshman-to-be.

His father was a member of the Merrimac team that had just folded in the county league, Pieper said, and left to join the Fults squad.

His Uncle Butch told him “You’re tall enough, you can wear a uniform,” Pieper recalled.

“OK. Well, I sat on the bench all year long, never had one at-bat,” Pieper continued. “But did I learn baseball. Listening to the old-timers talk about the game. And doggone, those guys knew it. They knew how to play the game and they taught it. You learned the game really well.”

Pieper finally got to pinch hit twice at the end of the following season, he said.

He eventually played for Maeystown, Waterloo and Valmeyer before his playing days were cut short due to injury.

“An accident cut short his playing days, but it resulted in a new career for him – a career in coaching,” Mon-Clair League Secretary/Treasurer Bob Blank said.

Blank, who pitched for Pieper in the 1970s, said the legendary Lakers manager assembled one of the most talented amateur baseball teams in the area.

“We played hard and we could compete with anybody,” Blank said of those old Lakers squads. “I had a front row seat on how, under Denny’s leadership, this group set the tone for the Lakers organization: Play hard, party hard and develop true friendships that last a lifetime.

“The tradition continues as players have come and gone through the past 50 years,” Blank concluded. “But there’s been one common thread, and it’s Denny Pieper.”

In addition to the Lifetime Achievement Award plaque, Pieper was presented a rocking chair autographed by former players.

“Fifty years of baseball has been very great to me,” an emotional Pieper said. “It’s been great because of friendships I’ve made. At the same time, it’s been very rewarding.”

Prior to honoring Pieper, the league inducted three new members into its Hall of Fame.

Mark Vogel of Waterloo, who played for Waterloo, Valmeyer and Belleville in 17 years with the league in addition to coaching another six seasons, was introduced by longtime Waterloo Buds/Millers manager Vern Moehrs.

Vogel thanked all family and friends in attendance for their sacrifices and dedication.

“When you’re in this league over 20 years, there’s a lot of sacrifice that has to be made on other peoples’ parts,” Vogel said.

He also thanked coaches Norm Toenjes, Lon Fulte, Pieper and especially Vern (and Lucille) Moehrs for their knowledge and experience.

“Vernie, thank you doesn’t do enough justice,” Vogel said. “My Mon-Clair League would not be possible without you. I’ve enjoyed all our years together.”

Vogel said he cherishes the relationships he has made through the league.

Lastly, Vogel offered gratitude to his father, Fritz, a former player in the league who passed away 12 years ago.

“Everything that I’ve managed to accomplish in sports is directly related to my father,” Vogel said. “This game and sports have been fantastic to me and it would not be possible without my dad. Somewhere, dad’s looking down on us today with a big smile on his face and all I can say is “Dad, we did it.’”

Another inductee was the late Al “Mubba” Alberter, who played 12 years with Millstadt VFW and was a career .300 hitter.

Gary Fitzgerald told the audience that Alberter started playing in the league at the age of 16 and was one of the best three-sports athletes to ever come out of Millstadt.

“He made the guys he played with better,” Fitzgerald said.

St. Louis Spikes legend Mike Tallis, who won league batting titles in 2009 and 2015, was also inducted into the Hall of Fame.