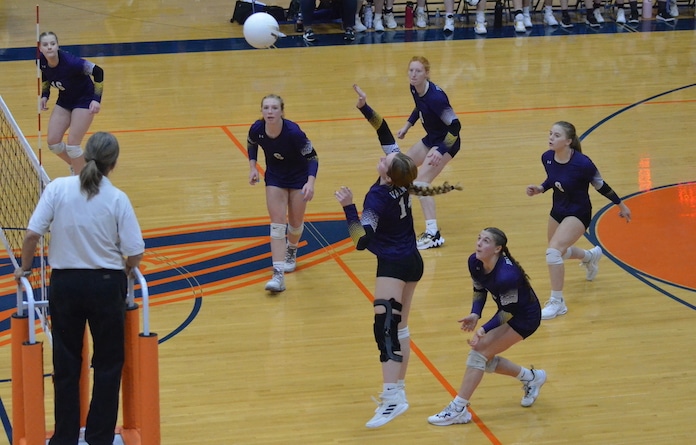 The season came to an end for the Valmeyer High School volleyball team last Wednesday night in the IHSA Class 1A Trico Sectional final.

In the third set, the Pirates fought off three season-ending match points at 24-21 before Trico finally emerged victorious at 32-30.

“What a battle!” Valmeyer head coach Karla Bivins told the Republic-Times. “Someone always has to go home defeated but if you have to be that team, what a way to go.”

Valmeyer had handed Trico its only loss of the season to that point, winning in two sets during the Red Bud tournament in early October.

Bivins said her squad “came out a little flat” in the sectional final.

“We weren’t playing aggressive,” Bivins said. “So after the first set, I told the girls everything they did had to be the most aggressive they’ve played all season. They had to serve aggressive, hit hard and dig up balls. My saying for 30-plus years has been play hard, play fast, play loud. And they did! It was a tough loss – still hurts to be that close and not achieve your goals.”

Brooke Miller finished with 10 kills and eight blocks in the match. For the season, Miller had 309 kills and 125 blocks.

Trico’s season came to an end Friday in the Centralia Supersectional, falling to Norris City in two sets.

The loss marked the final match for Valmeyer seniors Markee Voelker and Jayna Krekel. Voelker finished with 250 kills this season; Krekel had 649 assists.

Bivins said both were cornerstones of Valmeyer’s volleyball success the past handful of years.

“Markee and Jayna set the bar high after going 37-0 as eighth graders,” she said.

“Now it’s up to the juniors to carry on and finish what was started,” Bivins said.

McSchooler led the Pirates with 369 digs this season. Gideon ranked second on the team in blocks with 52.

Kierstin Miller recovered from injury to come on strong late this season for the Pirates.

In addition to the returning juniors, Bivins said “four solid sophomores” will be counted on next season: Violet Krekel, Lily Carron, Lilly Hohnbaum and Raylin Blaylock.

The Pirates have won several regional titles in volleyball. They will look to add another next season and possibly grab more hardware after that.