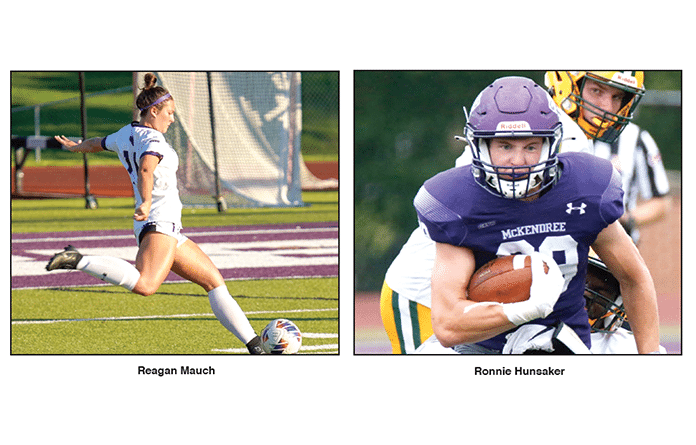 Several former local high school athletic standouts are continuing to compete at the next level for McKendree University in Lebanon.

The NCAA Division II women’s soccer Bearcats ended with a 13-2-5 record and played in the national tournament.

The Bearcats played in a Midwest Region match at Cedarville University in Ohio on Nov. 10 in the DII National Tournament, ending the season with a 3-1 loss.

Mauch, a junior, had three goals and an assist in 20 games played, logging 1,328 total minutes.

Gum, a sophomore, has scored one goal in two games played this season.

The McKendree men’s soccer team also had two locals on its roster.

Huels, a junior midfielder, played in all 16 games this season and logged 1,333 minutes.

Lacroix, a sophomore defender, did not see varsity playing time.

Ronnie Hunsaker, a sophomore running back, carried the ball 13 times for 112 yards and two touchdowns in 10 games played this season. He also had five receptions for 25 yards in addition to four tackles and two assists on special teams.

Donavan Bieber, a redshirt sophomore running back, has not seen action this season after transferring from Northern Illinois University.

McKendree went 5-6 on the season, ending with a loss Saturday at Lindenwood University in St. Charles, Mo.

One of the top ranked men’s wrestling teams in the nation, McKendree just opened its 2022-23 season.

Other locals taking part in college athletics for McKendree are CHS grad Emeline Brockland, who is a junior on the women’s golf squad, and McKendree cheerleaders Emily Gillan (CHS), Megan Levin (CHS) and Mackenzie Jerls (WHS).