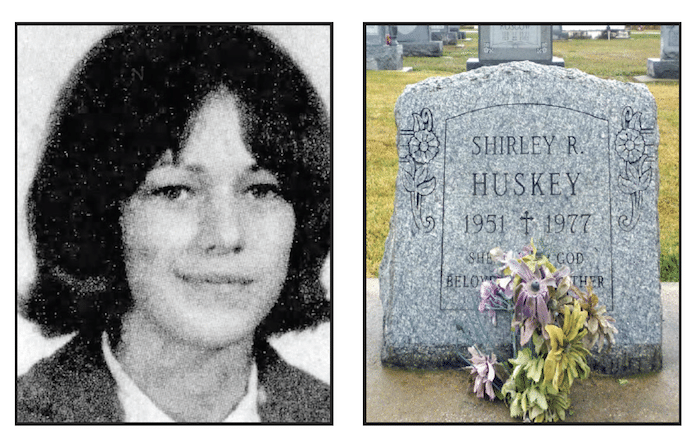 On a stormy night 45 years ago, 25-year-old Shirley Huskey was found by her husband, her body left on the lawn of their home on Ames Road in rural Monroe County.

After checking in on their sleeping 2-year-old daughter Amy and 5-month-old son Shane, Dan searched around the house for the apparently missing Shirley, ultimately finding her outside of the home with her throat slashed and bruises on her body.

Reporting from local newspapers at the time described the scene with Shirley in her bathrobe, nothing apparently taken from the home and a large amount of blood washed away due to heavy rains that night.

According to reporting from the Columbia Star at the time, Monroe County Coroner Kenneth Bode said the slash to her throat appeared not to be self-inflicted. No cutting instrument was found near her body.

Ed Muzzey, the lead investigator on the case for the Illinois Department of Law Enforcement’s Division of Investigation, said then that there appeared to have been a fight, but the killing looked to be random with no burglary motive or indication of sexual assault.

The only lead police had at that time was talk about an unidentified individual who had been spotted on a farm near Burksville – leaving another nearby barn where he had seemingly spent at least one night.

This individual had also been seen dashing into Mammoth Cave at the Illinois Caverns site near St. Joe after noticing an elderly couple approaching the cave.

The investigation that followed in 1977 ultimately never proved fruitful. Illinois State Police Lieutenant Elbert Jennings said that based on his review of the files, the case never went anywhere given the lack of usable material.

“From what I see — and this is with a lot of homicides — just the lack of witnesses and lack of physical evidence to bring the case to a point where charges were even pursued” hindered this investigation, Jennings said.

Reporting over the years identified the primary suspects as Dan Huskey, the previously mentioned unidentified man and a priest who – according to Shirley’s friend Donna Conley – Shirley said had raped her as a teenager.

Despite this reporting, Jennings said the case never had a particular list of suspects.

“From my review of this, there was never really a solid suspect established,” Jennings told the Republic-Times on Monday. “There were interviews done of the husband. They spoke with, I believe, someone that identified themselves as a priest. And they also spoke to a few other individuals … but I would not identify any of them as a suspect.”

A Waterloo Republican article said police had ruled out five or six suspects who might have had a possible motive given they each had “satisfactory alibis.”

Dan’s brother Mike Huskey, who was the only relative willing to speak with the Republic-Times about the long unsolved case, recalled the night of Shirley’s death and the months that followed.

Mike was an industrial machinist, as was his father. Even though both of them were working far from the Huskey home on Ames Road when they were notified, Shirley’s father-in-law reached the house even before the sheriff.

“He was working in Hazelwood (Mo.) and I was working in Granite City, and we come home from work but there was really nothing we could do,” Mike said.

Mike described the unpleasant months that followed that night for both he and Dan, as, according to Mike, Monroe County law enforcement proceeded to interrogate the two rigorously at the time.

“If it would have been a public defender case, you probably wouldn’t be talking to me or Dan,” Mike said. “Because they’d’ve tried to hang it on one of us two. I know that happens a lot, but still.”

A June 21, 1978 article in the Waterloo Republican quoted then Monroe County State’s Attorney Dennis Jacobsen, who said the investigators were stymied and the case was puzzling, but there is no statute of limitations for murder.

“If 10 years from now, we find the person who did it, we can prosecute him,” Jacobsen said.

The case has since gone cold, though a mid-2000s article from the Belleville News-Democrat described an attempt from reporters to investigate the Huskey house — which had since come under new ownership — with a chemical meant to detect blood.

While it is possible the reporters found blood, it would have taken a forensic expert to know for sure, and the experiment ultimately didn’t result in any new investigations for the case.

Though the case remains unsolved for 45 years, Jennings said it remains open until it meets some sort of adequate conclusion, as homicide cases do.

He requested any members of the public who might have some information regarding Shirley’s death reach out to ISP or St. Louis-area CrimeStoppers at 866-371-8477.

“If we never find out what happened to Ms. Huskey, this case will remain open,” Jennings said, “and we are once again soliciting any help the public can provide regarding this case, and we will investigate leads to the fullest until we can get some type of resolution of what occurred.”