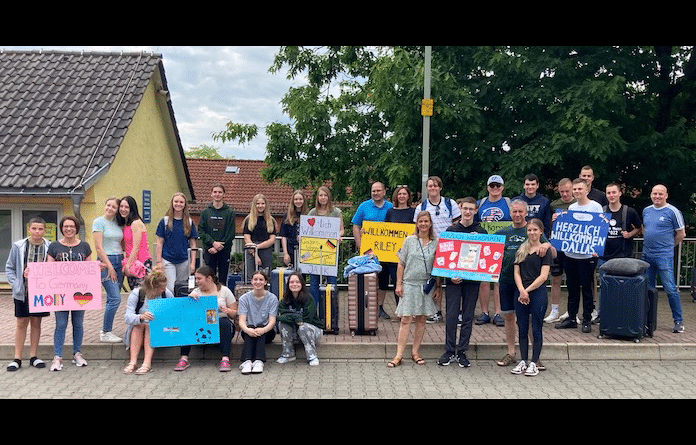 The student exchange is an annual event that takes place between Columbia and its German sister city of Gedern. German students visited Columbia earlier this year from April to May.

He said Columbia students typically visit Germany in even years while Gedern students come to Columbia in odd years, but because the COVID-19 pandemic shut down the trip for the last two years, Nickerson and the German organizers decided to do both trips this year.

“It’s been a little bit different of a year because normally we don’t do both exchanges in the same year,” Nickerson said. “So we’ve actually seen a lot of each other this year, which has been pretty cool.”

Nickerson said they plan on returning to the usual rhythm next year, with just the German students visiting Columbia.

According to Nickerson, the student exchanges started in 1993 as the two cities formally acknowledged one another as sister cities following some local families’ research into their heritage.

“It all started back in actually ’92,” Nickerson said. “There was a group of adults from Columbia that wanted to trace their roots … They started doing this research and they found out that they were all sort of being led back to the same area, the same town.”

Soon after, the then mayors and principals of the two cities acknowledged their relationship and began putting the exchange together.

There is also a program to allow students to visit and attend school in their sister city for an entire year, though only a total of 25 students ­— 24 from Germany and one from Columbia — have participated.

One of the CHS students who left for Germany in early June was incoming senior Riley Klevorn.

Klevorn said that the biggest reasons he wanted to participate were to get a sense of his own family background and experience a different country.

“Personally for me it was just the fact that I was given this opportunity and I thought it was a very good opportunity to go out and see a completely different culture – especially one that I have heritage in my family,” Klevorn said.

Students in the exchange don’t go just to sightsee, however. They go to experience life as a German student. They also stay with a host family during their visit.

For Klevorn, culture shock came largely in the form of meals and school schedules. He said he wasn’t used to having his big meal at midday, nor was he accustomed to having three or four different classes every day.

Another major difference for him was the drinking culture being far more “open and relaxed.” While he didn’t participate, he talked about seeing a 14-year-old in his host family drinking beer.

Klevorn was also able to see some of the sights while in Germany, primarily the Marksburg Castle and a cruise along the Rhine River.

Klevorn said he had a positive experience, and he plans on visiting Germany again after he graduates.

“After they come here, I’m planning on going back there in the summer to visit because I made a lot of friends there,” Klevorn said. “I do highly recommend going on this trip. It is an amazing experience.”