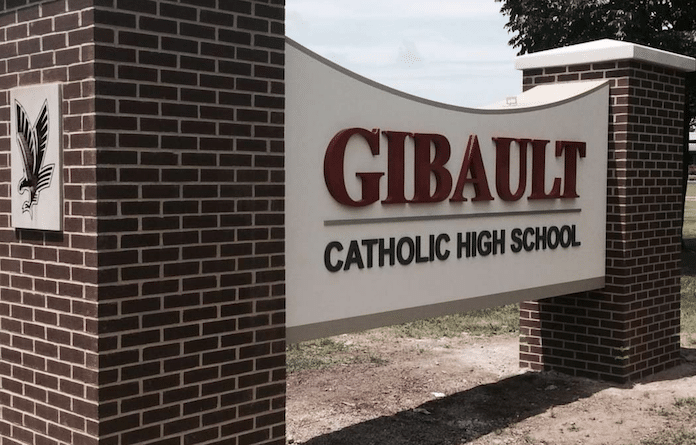 The Gibault Men’s Club is currently set to finish renovation projects this summer following a final big work day in the school’s gymnasium.

This summer’s projects focused chiefly on the gym’s stage area. They included renovation of the side and backstage stairs, a cleaning and painting of the crucifix and its spot on the wall and a repainting of the side walls in what the club’s president called “Gibault red.”

There were additional improvements to the stage as well, and the projects won’t be officially finished until new LED lights are professionally installed in the gym.

The Gibault Men’s Club is a collection of men who regularly work to renovate and raise funds for the school.

Most of them, like Steve Wilke, have or used to have a student attending Gibault. Others simply joined because of their support for Catholic education or because of friends.

Regardless of why they join, many of the members stay because of the relationships they develop. Wilke said as much as he joked about how he originally joined up with the group about a decade ago.

“They had a sign-up thing for new freshmen parents coming in at orientation and my wife signed me up. I wasn’t there,” Wilke said. “So I didn’t know anybody here, I didn’t know a soul so I showed up to the meeting and I really got to be good friends with everybody over time.”

The club also persists because of the members’ passion for Catholic education.

Gibault Men’s Club President Don Francescon remarked on the faith element of the group as well as  why, even after his last child graduated Gibault in 2015, he continues to support the school personally.

“Obviously, Catholic education is paramount to all of us in the club,” Francescon said. “It’s something we believe in and we stand behind. And we want in days like now, where things are so uncertain, we want to really stand behind it and make our school as viable and progressive as possible when it comes to appeal and classroom settings and things like that.”

While the club offers a significant amount of support for the school primarily through Ford test drives and help with Gibault’s Oktoberfest, some of their most noticeable work happens during their summer projects.

Francescon and Wilke said the club has done a lot to keep the school updated.

According to Wilke, what they do any particular year is typically decided based on what staff and faculty bring up before the summer – though the gym project this summer was originally requested by previous principal Russ Hart about five years ago.

“We usually work with the school principal and some of the maintenance people here to see what kind of needs to be addressed, what issues, what’s maybe looking bad,” Wilke said.

A major on-going project for Gibault is development of a STEM lab. While the club isn’t handling the project on its own, according to Francescon and Gibault Principal Stephen Kidd, it has still played a significant role in the design.

Kidd also expressed his affinity for the club and the contributions they make to the school.

“They’re so good in our school,” Kidd said. “Also coming in and doing the build and helping out with a lot of things that they’re doing in the gym. I could show you 10 other spaces that they’ve touched and created in our building, and I imagine before this project is done they’ll put their mark on it as they always do.”