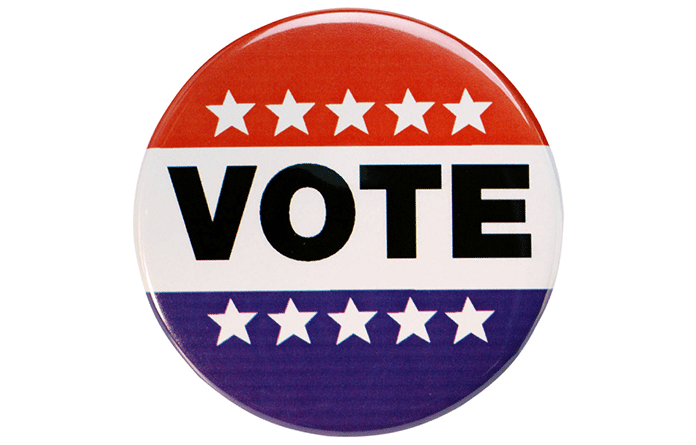 With virtually no contested races in the 2022 Illinois primary election for Democrats, Monroe County voters pulled Republican primary ballots at a more than four-to-one ratio.

There were nearly 4,500 total ballots cast with 3,595 pulled for the Republican races compared to 854 for the Democrat primary. For the Valmeyer school tax proposition, 23 additional non-partisan ballots were cast.

The 17 percent turnout for this year’s primary election is higher than the approximately 15 percent of voters in the 2018 primary.

The earliest statewide result on the Republican side came in not long after polls closed with the announcement that Illinois State Sen. Darren Bailey of the 55th District will be the Republican opponent of incumbent Gov. JB Pritzker this November.

“Tonight our movement sent a clear message to the establishment and the political elites: We will not be ignored,” Bailey said in a victory speech just before 9 p.m. Tuesday.

Bailey gained recognition during the COVID-19 pandemic when he sued Pritzker over the state’s executive stay-at-home order. Bailey was also escorted from the floor of the General Assembly in 2021 for refusing to wear a mask.

Waterloo native Paul Schimpf won Monroe County in the Republican primary for governor with a total of 1,569 votes to Bailey’s 1,541 in his attempt to win the party’s nod.

In a statement, Schimpf congratulated Bailey “on his well-earned victory in the Illinois Republican Primary. I urge my supporters and all Republicans to vote for Senator Bailey in the general election this November.”

In the race for the Republican nomination for the U.S. Senator seat for Illinois to be decided in November, upstate lawyer Kathy Salvi held a sizable lead over Belleville’s Peggy Hubbard.

In Monroe County, Hubbard took over 50 percent of the over 3,000 votes cast in the Republican race. Hubbard also fared well in many other counties in Southern Illinois.

As of press time, in the race for Illinois Attorney General, Greenville lawyer Thomas DeVore appeared to be the Republican choice to face incumbent Democrat Kwame Raoul, who ran unopposed.

DeVore represented several area schools in the past year as part of a statewide lawsuit to prevent mandatory mask requirements in Illinois public schools.

Brady received more than twice the amount of votes in Monroe County than his Republican challenger while Giannoulias’ 360 votes only outpaced his closest Democratic opponent by 51 tallies.

Homer “Chip” Markel appeared to have the edge on Democratic opponent Joshua Qualls for the right to challenge incumbent Republican Mike Bost in the race for representative of the 12th congressional district in the U.S. House of Representatives.

In Valmeyer, a proposition to increase the property tax limiting rate will pass. The funds will go toward the Valmeyer School District.

Funding for the district has come from the Valmeyer government selling bonds for the last decade, a process which results in the district losing some money due to the cost of selling bonds. The village decided to ask the voters to increase the limiting rate rather than allow for the sale of bonds for another five years.

Unofficial results in Millstadt show that the proposal to expand the library district to include properties outside the current boundary has failed to pass. The proposition had been the subject of much controversy, with significant pushback from many outside the district.

“The library is going to end up building a new building either way,” said Millstadt Library Director Nichole Lauko. “It’s a disappointment that we wouldn’t be able to provide full access to everyone outside the district, which was an initial aim, but if that’s what the majority wanted, then, I mean, that’s the point of a democracy, and that’s the point of a vote.”

Millstadt chiropractor Kevin Schmidt appears to be the Republican challenger to Democrat incumbent LaToya Greenwood in the race for the Illinois House of Representatives 114th District seat.

Voting in Monroe County did not go as smoothly as in years past. During a midday update, Monroe County Clerk Jonathan McLean reported a ballot paper jam at one location and “several voters who did not know where they voted – mainly due to the precinct boundary changes we made earlier this year.”

In a more serious situation later in the afternoon, a printing error led to a long wait to vote for some voters at Hope Christian Church.

McLean said his office was notified of a possible shortage of ballots for eight precincts. He then utilized the “ballots on demand” printing function available at his office to provide additional ballots for polling locations.

Voters for Precinct 22 at Hope Christian Church near Columbia began using the newer ballots for the Republican primary just before 4 p.m., but the ballot tabulator began to reject the ballots as unreadable.

After about 15 minutes of investigation, McLean said his office realized the margins on the newly-printed ballots were not within the parameters needed for the tabulating machines to read the votes cast.

McLean delivered a set of new ballots with correct margins to Hope and he said everything was back to normal just before 5 p.m.

While waiting for the second set of new ballots, voters for Precinct 22 had to use a touch-screen voting machine, leading to about a 40-minute wait to vote between 4 p.m. and 5 p.m.

McLean said a few voters in Precinct 20 at Valmeyer also tried to use the defective ballots, although the effect was not as severe as in Precinct 22.

McLean said all the incorrect ballots, including ones that had not been used, were destroyed. He estimated about 50 destroyed ballots had been marked. He added that only Republican ballots had been rejected due to the printing error.

“The machine did exactly what it was supposed to do,” McLean said, noting that the ballots were simply rejected with no votes recorded.

“We typically overprint” in regard to anticipated demand, McLean said, but did not for this election due to recent paper shortages.