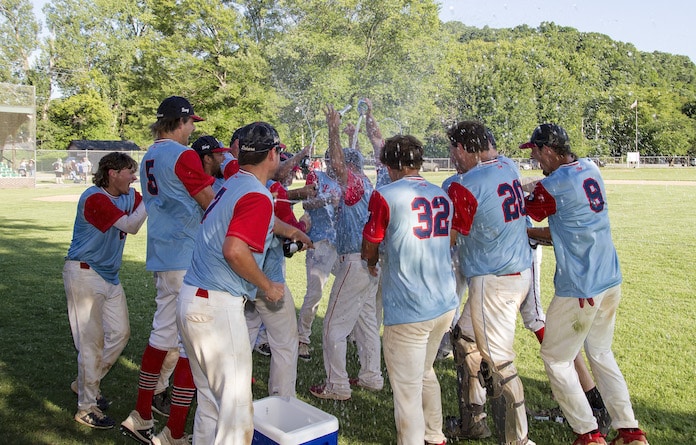 A longstanding local baseball rivalry was renewed Saturday as the Valmeyer Lakers and Waterloo Buds faced off in the Mon-Clair League playoff finals at Borsch Park.

In two games that went down to the wire, the Lakers emerged victorious for their first playoff title since 2003.

First-year Waterloo manager Barry Grant was unable to be in the dugout for game one, as he was ejected from last weekend’s semifinal win over Millstadt and was required to sit out.

Both southpaws kept opposing hitters off balance, and the game was scoreless through five innings.

In the top of the sixth inning, Waterloo got on the board after Preston Wright doubled and Pat Tueth singled to right with the bases loaded to make it 1-0. An infield single by Grant Staffen made it 2-0.

Valmeyer answered in the bottom of the sixth. Jacob Rowold delivered an RBI single, which was followed by a bases loaded walk to tie the game at 2-2. With the bases still jammed, Nate Albrecht came on in relief of McGilvray to get an inning-ending double play on just one pitch.

Back and forth the game continued, as Waterloo’s Keegan Baxmeyer doubled off Valmeyer reliever Trevor Davis in the top of the seventh. Following a dazzling defensive play by Valmeyer’s Jonah James to catch a foul fly ball near the left field fence, an infield error and wild pitch led to the Buds taking a 3-2 lead.

But the Lakers answered again.

James walked to lead off the bottom of the seventh and league veteran Ethan Ruff bunted for a hit. Following a successful sacrifice bunt by Davis, Matt Reinholz lined out to left to score James.

The bases were loaded for another league veteran, that being Logan Mueth. He snuck a grounder up the middle, just past Waterloo’s diving second baseman, to score Ruff and win the game, 4-3.

Following a short break, the rivals locked horns for game two of this best-of-three championship series.

The starting pitchers in this one, lefty Jacob Thompson for Valmeyer and righty Brooks McDowell for Waterloo, shut the offenses down. The game was scoreless after seven innings.

Reinholz, who was named MVP of the playoffs, finally connected with a two-run double in the top of the eighth inning to put the Lakers up 2-0. Valmeyer added a run, and Thompson shut the door in the bottom of the eighth for a complete game shutout.

Reinholz joined Lakers teammates Ruff and Mueth in riding off into the sunset, as all three league vets have announced they are hanging up their spikes.

“I would like to congratulate Valmeyer on a great season,” Grant said afterward. “The championship series was very exciting. Congratulations to Matt for being named the MVP. He was well-deserving of the award.”

In addition to its four playoff wins, Valmeyer went 16-8 in the regular season to claim its first Monroe Division crown since 1976.

As for the Buds, not many picked them to be this close to a league title in 2022 – except the Buds’ dugout.

“There wasn’t one guy in our dugout this weekend that didn’t believe we had a chance in the playoffs,” Grant said.

The Buds started 1-5 under Grant, but they eventually found their stride and rattled off several victories in a row.

“We came up a play or two short in the finals, but there is nothing but pride and respect for my men for how they competed and how they gave every ounce to this team and to their teammates,” Grant said. “They competed every game like it was their last. That’s what I most respect about them. I would also like to thank my coaches, Jeff Kaiser and Gabe Doiron, for making this year so enjoyable for me and helping me work with each of the players and game management. It wouldn’t have been the same without them along my side.”