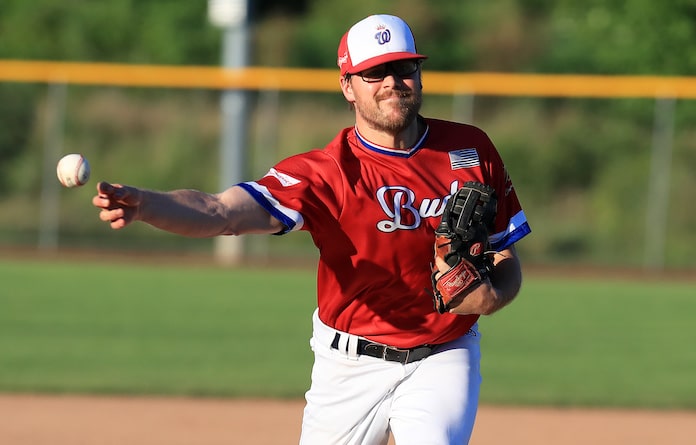 The stage is set for a classic championship series this weekend at Borsch Park in Valmeyer, as the Waterloo Buds and Valmeyer Lakers will battle for Mon-Clair League supremacy.

It’s not much of a surprise that the Lakers are playing in the final, as they had the best regular season record in the league and won their first Monroe Division crown since 1976.

The Buds, however, had to outlast defending champion Millstadt in a 14-inning marathon semifinal contest on Sunday to advance.

Waterloo, with first-year manager Barry Grant at the helm, rushed out to a 4-0 lead in the first, the big blow being a three-run home run off the bat of Elijah Dale.

The Buds tacked on an additional run in the third inning on an RBI sacrifice fly by Preston Wright.

The lead for Waterloo was 5-0 after five innings before Millstadt started chipping away. The Green Machine scored six runs in the sixth to take the lead.

Trailing 7-5 in the eighth inning, Trey Kueper walked and scored for the Buds. In the ninth, Dale’s hit drove in Keegan Baxmeyer for his fourth RBI of the game and the game was tied after regulation.

Millstadt loaded the bases with nobody out in the bottom of the 12th inning, after which Wright caught a flyout in rightfield and gunned out a Millstadt baserunner trying to score. The Buds got out of the jam with another flyout.

Similarly, the Buds loaded the bases with nobody out in the top of the 13th inning but were unable to score. Millstadt’s rightfielder also gunned out a Waterloo baserunner at the plate.

Finally, the Buds broke through in the 14th inning. Kueper led off with a single and was bunted over to second by Adam Goss.

Grant called it “one of the most amazing, historic wins in Buds history,” adding that “when asked if he was getting tired, Brooks had this to say: ‘You’re not taking me out. I’m winning this game,’ he told Coach Jeff Kaiser.”

Grant said it was one of the most memorable games he has ever been a part of as a player, coach or fan.

“Both teams were relentless. I have never been more proud as their skipper because of the heart they showed, and the fight they had for one another until the very last out was recorded,” he said.

Waterloo advanced to Sunday’s semifinal courtesy of a 7-1 win over the St. Louis Spikes.

Dale struck out 12 in seven shutout innings pitched, with Braeden Dobbs (3-for-4), Baxmeyer (3-for-5) and Schlecht (1-for-3) each driving in multiple runs.

Millstadt opened its postseason with a convincing 18-1 walloping of the Southeast Missouri Tropics on Saturday. A 10-run first inning sent the Green Machine on their way.

Valmeyer opened its playoffs as the top seed, winning 9-0 over the Cape Girardeau Capahas on Saturday. The Lakers plated three in the first inning and closed it out with five runs in the ninth.

Young righthander Dominic Voegele, the hard-throwing ace of the Columbia High School baseball team, struck out 11 in six innings pitched. He allowed just one hit and walked only one batter.

On Sunday, the Lakers blasted the Edwardsville Aces, 10-1. Valmeyer plated runs in each of the first four innings and led 8-0 early on.

Matt Reinholz went 3-for-4 with a homer and two RBIs. Trevor Davis went 3-for-5 with an RBI. The Lakers also got two hits each from Ruff, Jacob Rowold, John Wuelling and Logan Mueth.

The best-of-three championship series takes place starting with a seven-inning contest between Waterloo and Valmeyer at 1:30 p.m. Saturday at Borsch Park in Valmeyer.

Valmeyer’s last playoff championship (its sixth overall) was in 2003 over Fairview Heights.

Waterloo’s last playoff championship (its 23rd) was in 2013 over the St. Louis Spikes.