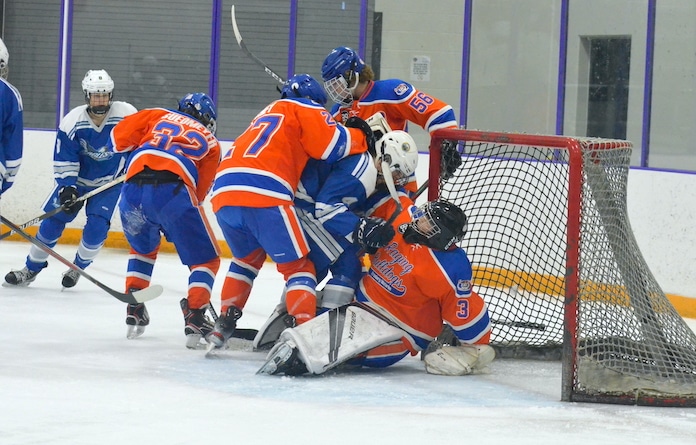 Fans, coaches and players alike wish Thursday night’s showdown between hockey rivals Columbia and Freeburg-Waterloo would have been extended to determine a winner after the squads battled to a 4-4 tie at the McKendree Metro Rec Plex in O’Fallon.

But there are no overtimes in the regular season, so followers in both camps will have to wait until next time.

In a back-and-forth affair that featured some intense, physical moments for November hockey, both the Ice Eagles and Raging Bulldogs showed they mean business in the Mississippi Valley Club Hockey Association this season.

“I’m happy we didn’t lose. However, we should have won that game,” Raging Bulldogs head coach Scotty Roberts said afterward. “If it wasn’t for bad turnovers in our defensive zone, that game would have had a different outcome.”

Freeburg-Waterloo outshot Columbia in the contest, 44-33.

Jack Reuss had himself a night for the Ice Eagles, netting all four goals for his team. His first one opened the scoring less than one minute into the game.

Down a man in the penalty box, the Raging Bulldogs still managed to answer less than two minutes later on a goal by team captain Donovan Knuckles.

Reuss muscled his way to his second goal with just more than 10 minutes to go in the second period. After laying a big hit on a Freeburg-Waterloo player, Reuss made it 2-2.

Columbia had a great chance to take the lead late in the second period, having a two-man advantage for 30 seconds following a pair of Freeburg-Waterloo penalties. The Ice Eagles were unable to capitalize, however.

With 42 seconds left in the second period, Connor Blair scored on an assist from Ganz to make it a 3-2 lead for the Raging Bulldogs.

Just 21 seconds later, Reuss found the back of the net again to tie it at 3-3.

The score remained that way until Mikey Gildehaus slipped one past Columbia goalie Tim Barbee with 4:20 left in regulation. Blair made the assist.

But there was that man again. Just 20 seconds later, Reuss powered his way to yet another goal to tie it at 4-4.

“Every time we went up, they answered right back,” Roberts said. “Reuss had himself a night.”

Things got testy between the rivals late, with the Raging Bulldogs going to the box for a hit from behind, and then the Ice Eagles getting penalized for unsportsmanlike conduct.

Neither team could break through in the final minutes, resulting in a tie.

Roberts praised Columbia’s goalie for stellar play between the pipes while also giving credit to his goalie.

“Barbee stood on his head, which is normal for him and that’s why he’s the best goalie in the league,” Roberts said. “However, Bushee played amazing as well and made some incredible saves of his own.”

Columbia is now 4-0-3 on the season, good for first in the MVCHA Varsity East standings. Freeburg-Waterloo is in second place at 4-1-1. The rivals meet again Tuesday night, Jan. 4.

After that, perhaps a postseason battle awaits?

“We play them one more time in the regular season and I’m sure we will run into one another in the playoffs… hopefully the championship,” Roberts said.

Read a recap of earlier hockey action by clicking here.