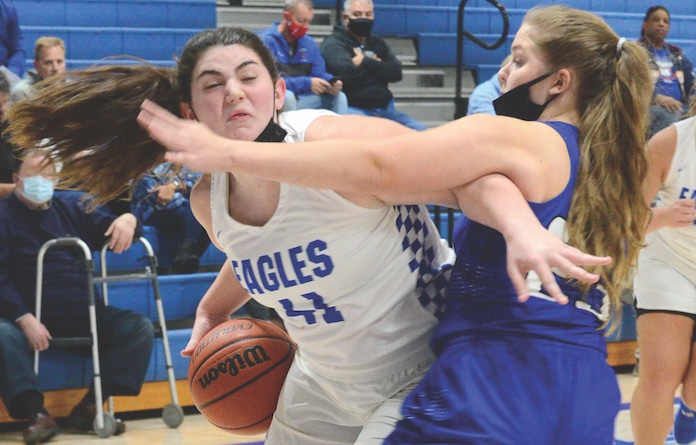 The Candy Cane Classic is underway at Gibault Catholic High School, with two local girls hoops squads earning the right to play each other.

Columbia (4-4) and Waterloo (9-2) will battle in the second round of the tournament at 6 p.m. Wednesday, with the winner advancing to Saturday’s championship game.

Prior to the tourney, Columbia posted a 44-32 conference win over Salem on Thursday. Jordan Holten, a 5-foot-10 freshman, had 14 points and six rebounds. Jany added 13 points.

Jany, a 5-foot-9 junior guard, leads Columbia in scoring this season at 13.1 points per game – including 44 percent shooting from three-point range.

The Bulldogs had no trouble in their tourney opener, winning 58-25 over Valmeyer on Monday. Waterloo led 27-2 after the first quarter.

Norah Gum, a 6-foot-tall junior, poured in 23 points and grabbed 10 rebounds to lead the Bulldogs. She leads Waterloo in scoring this season at 16.5 points per game and also averages nearly nine rebounds per contest.

Prior to the tourney, Waterloo picked up a 73-63 conference victory over Mascoutah on Thursday. The Bulldogs took control of the game by outscoring Mascoutah, 20-11, in the third quarter.

Prior to Valmeyer’s tourney opening loss to Waterloo, the Pirates (1-5) dropped a 32-31 contest to Marissa on Thursday.

Valmeyer led 28-19 after three quarters but could not hold on. Brooke Miller led the Pirates with 14 points and 11 rebounds.

Gibault was busy prior to the tourney, winning two of three recent games under new head coach Mike Juenger.

On Saturday, the Hawks won 46-40 over Wood River despite shooting just 3-for-30 from three-point range.

Small is averaging nearly 20 points and eight rebounds per game this season.

On Thursday, Dupo won 53-10 over Lebanon. The Tigers led 18-0 after the first quarter and outscored Lebanon, 17-1, in the third quarter.

Dupo plays at New Athens on Thursday and at Valmeyer on Monday.