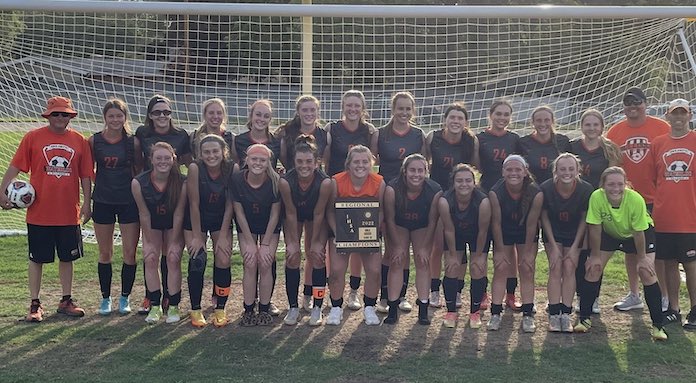 One great girls soccer squad plays on while another was sent home in recent postseason action.

Waterloo (20-4-1) captured a regional title on Friday night and in the process notched a milestone victory for its head coach.

Chad Holden, who has won 345 games at the helm of the boys soccer team, secured career victory No. 300 for the girls program when his Bulldogs downed Carterville, 7-0, in the Class 2A Centralia Regional final.

“Of course winning a regional is something the girls should be proud of,” Holden said. “They have worked hard all year and deserved it.  Getting the 300 wins is more about the program than me.  I have been here since the first year we had a girls team, so the program now has 300 wins and getting there involves a lot of great players and past and present assistant coaches. Our current assistant coaches, Jeff Brueggeman and Tim Augustine, have been around quite a while now and are a big part of our success – so it’s nice to share the 300 wins with them.”

Waterloo advanced to the Triad Sectional, where it faced Mascoutah on Tuesday. The Bulldogs won in penalty kicks, tying the program’s single season mark for victories at 20. The match was tied 2-2 after regulation and two overtimes. Waterloo goalkeeper Lexi Stephens connected on one of the PK attempts, with Karley Kinzinger making the game-winning kick for the ‘Dogs.

Richter netted two goals, making her the first WHS soccer player (male or female) to record 100 points in a season.

Waterloo now faces rival Triad in the sectional final set for 6 p.m. Friday. The teams split their regular season matches, with Waterloo handing the defending state champ its only loss on April 28.

Last Tuesday, Waterloo advanced to the regional final with an 8-0 win over Centralia.

Richter netted six goals, breaking the previous program single season record for goals in the process. The previous record was 37 goals. She now has 43 goals and 14 assists this spring.

Reese Woelfel, a freshman, scored for the Eagles on a head ball in regulation on an assist from sophomore Maddie Mauch.

Both goals in regulation came from corner kicks.

The two teams were tied 1-1 after regulation and two 10-minute overtime periods, leaving it to penalty kicks to decide a winner.

Columbia had the wind at its back in the first half, but played against the win in the second half.

The loss snapped Columbia’s nine-game winning streak and ended its season at 16-8-1.

Columbia advanced to the sectional final with a 3-1 victory over Mater Dei on Thursday. Mauch netted a goal and recorded two assists. Woelfel added the other goal.

Mauch led the Eagles in scoring with 29 goals and 19 assists. Woelfel finished strong this season, notching 14 goals and 11 assists.