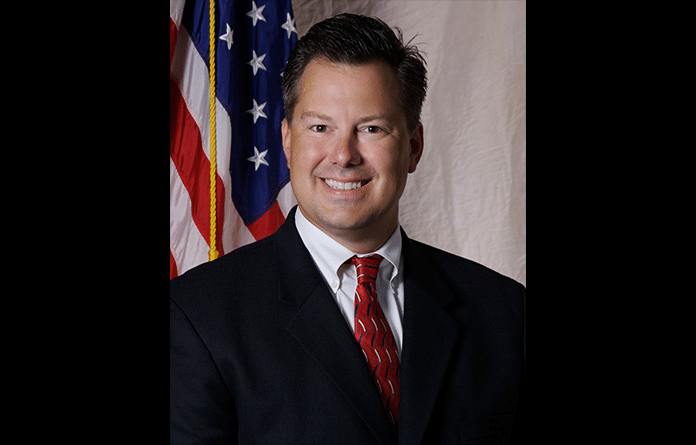 Columbia Mayor Kevin Hutchinson resigned Monday after being indicted in federal court last week in connection with his insurance dealings with the city.

“It is with a heavy heart, but due to the recent events, I feel it is in the best interest of the city and my family for me to immediately resign my position as mayor,” Hutchinson said in a press release issued by the city.

Hutchinson, who announced this past summer that he wasn’t going to seek a fifth term as mayor in 2021, is officially charged with one count of false statement to the Metro-East Public Corruption Task Force.

On March 20, 2019, Hutchinson allegedly told two task force agents that his only interest in a company called Maher Rosenheim Comfort Tabash’s insurance contract with the city was in his official capacity as mayor.

The filing claims that statement was materially false.

The Feb. 24 filing at the U.S. District Court for the Southern District of Illinois in East St. Louis states that Hutchinson, as Columbia mayor and a licensed insurance agent who owned a closely held corporation called BMC Associates, “received referral commissions from the insurance contracts that the City of Columbia placed with MRCT and Illinois Counties Risk Management Trust.”

Hutchinson works as a risk manager and insurance broker for CJ Thomas.

MRCT was a benefits firm in St. Louis, offering comprehensive employee benefits, financial products and human resources consulting. The company has since dissolved with certain aspects of the business being bought by One Digital, which is not a named party in the Hutchinson matter.

According to the court filing, Hutchinson was prohibited under the Illinois Public Officer Prohibited Activities Act from being financially interested, directly or indirectly, in any contract, work or business of the city.

The task force, which consists of agents with the FBI, IRS and Illinois State Police, opened an investigation into Hutchinson to determine whether he had violated federal law after learning he received insurance policy referral commissions for a health insurance policy for city employees.

Hutchinson’s annual Statement of Economic Interest filing with the Monroe County Clerk’s office on June 28, 2018, was false in that it did not mention he had a personal financial interest in any city business, the filing claims.

The City of Columbia issued a press release Thursday afternoon that it was aware of Hutchinson’s indictment.

“The Columbia City Council is dedicated to the citizens of the city of Columbia and will not allow this to detract from their service to the residents,” the statement reads. “At all times, the city has cooperated with and will continue to cooperate with the investigation.”

Hutchinson, who began his career in public service 20 years ago when serving as a member of the plan commission and city council, was reached for comment last Thursday about the indictment.

“I’ve got an attorney and I’ve been advised to say nothing,” he told the Republic-Times.

Brimm echoed the press release, saying the news will not “distract” from making sure Columbia residents’ needs are met.

He also confirmed there is no language in city code that would have changed Hutchinson’s status as mayor despite the federal indictment.

“There’s nothing on the books” that would have prevented Hutchinson from continuing his work as mayor, Brimm said, adding the “light agenda” for Monday’s regular city council meeting was “not intentional.”

At Monday’s meeting, the council selected Ward III Alderman Gene Ebersohl to serve as temporary chairperson and set a date for the meeting to chose the interim mayor.

Per city code, the council elects an acting mayor if there is a vacancy of the position within 130 days of an upcoming election.

Ebersohl will vote in the same manner as the rest of the alderman and would not provide a tie-breaking vote if an issue arose.

Columbia City Attorney Terry Bruckert advised the alderman to “get it done” Wednesday, suggesting the alderman have a list of top three choices for acting mayor before the meeting and find compromise if necessary to prevent a disruption of normal city business in the next two months.

(with reporting from James “Tal” Moss and Scott Woodsmall)