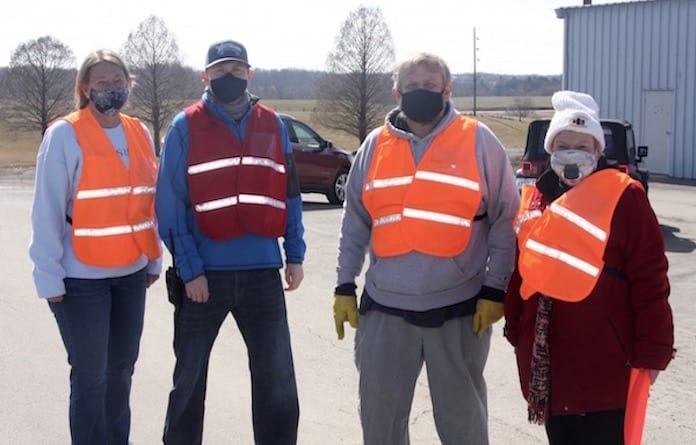 Even with the limited supply of COVID-19 vaccine that Monroe County is receiving, vaccine clinics that take place at the Monroe County Fairgrounds are a massive undertaking.

Monroe County Health Department Administrator John Wagner said they would not be possible without the help of dozens of volunteers.

“We rely heavily on them, and we’ve had no shortage of them,” Wagner said. “We haven’t even put the call out. If we did that, we’d have a lot more people. These are people who called us to volunteer.”

The volunteers perform numerous types of jobs at the clinics and come from diverse backgrounds.

Thomas Ziegler, a flight nurse with Air Evac Lifestream, said he first learned of a need for volunteers when he got his first shot at a clinic for health care workers here in December.

“I realized the health department had so few employees, and I wanted to help,” the Waterloo resident and Columbia native said. “I have a skill, experience and knowledge that could be helpful here.”

The health department has 10 employees, and Wagner said nine of them help run the clinics while one person remains at the office.

Ziegler has worked at the majority of the Monroe County clinics, with his role being to monitor people after they get vaccinated. He explains why the people are waiting for 15-30 minutes, including telling them what symptoms to look out for in case they have a severe reaction to the shot.

“We’re literally just watching to see if somebody would have a reaction to the vaccine. It’s very rare that they would have it, but we need to be there for the one person that does,” Ziegler explained.

Other health care workers who have already been on the frontlines of the pandemic have been helping the county even longer than Ziegler.

Liz Nonn and Jill Helfrich both have been assisting since the vaccine became available after reaching out to the health department last year.

These women mainly administer shots to people as they drive up, which both said was surprisingly emotional.

“It’s been a highlight of my career for sure,” Helfrich, a Columbia resident, said.

Not everyone who volunteers has medical expertise or even lives in Monroe County.

Brett Benyo grew up in Waterloo, but he now lives in St. Louis. Benyo works in finance, but he has been volunteering at the clinics since January after his parents, Joe and Sandy Benyo, reached out to see how their family could help.

“We wanted to reach out and help as best we could because, obviously, we think it’s important,” Brett said. “As much as we’re doing here, it takes a sizable group of people to get everything done.”

Brett’s job has mainly been directing traffic, which often entails ensuring the two lines for vaccinations at many clinics remain roughly equal. He has also assisted with observing people after they get their shot.

Thursday, those who got their second dose would have likely met Stacy Collins before Brett because she was helping people complete consent forms and handing them vaccination cards.

A Freeburg resident who was volunteering for the first time last week, Collins is friends with an employee of the health department who told her about the clinics.

“It just sounded like an interesting thing to do for the community,” Collins said.

Although their roles and backgrounds may be different, all the volunteers who spoke with the Republic-Times said helping at the clinics has been rewarding in a few ways.

“It’s been a pretty cruddy year, and it feels good to be part of something that’s helping us get a step closer to bringing this thing to an end,” Ziegler said. “It feels good to help out the local community. I’m born and bred here. These are people I live with and grew up with.”

Nonn and Helfrich echoed that sentiment.

“I am very happy to be part of the solution,” Nonn said. “I am lucky to be here.”

“We want to be here,” Helfrich added. “We’ve been here in the snow and cold weather. We want to have an impact. It’s a great feeling to be able to help people like this.”

For its part, the community has expressed gratitude to those who are helping to protect it against a virus that has infected thousands and killed or hospitalized hundreds of its members.

“People are appreciative. It feels good to help the community get the vaccine,” Collins said.

“It feels great,” Benyo agreed. “People are so thankful.

Someone gave me candy today. Someone else told me they loved me.”

Wagner said volunteers will continue to be necessary and welcome moving forward – especially as the latest projections from the state show Monroe County’s allotment of vaccine increasing again soon.