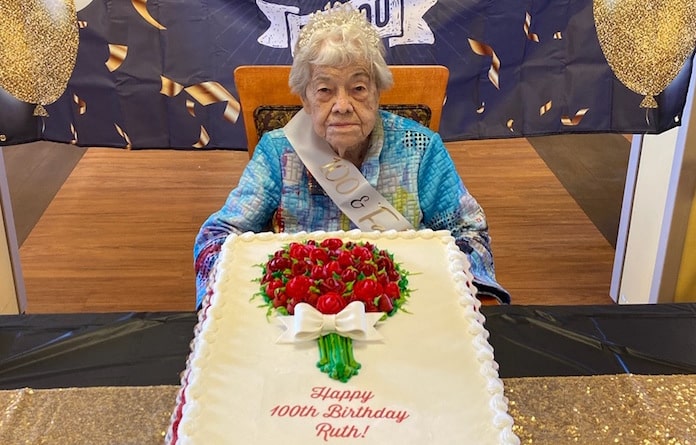 Ruth Stumpf celebrated her 100th birthday recently with a party at Magnolia Terrace in Waterloo.

She is now the oldest resident at the assisted living community.

She is following in the footsteps of three aunts who also lived to be over 100.

Ruth was born Feb. 20, 1921, near Maeystown on the family farm. Her parents were Albert and Emma Miller Faus and she had two siblings, Melvin and Doris.

The farmhouse had wood stoves, no bathroom, no running water and no electricity. The Sears catalogue pages were used as toilet paper in the outhouse. When electricity arrived in 1938, their first purchases included a refrigerator, a radio and an iron.

Ruth attended Posten School – a one-room school with 60 students and one teacher – for grades 1-8. She then went to Maeystown High School, which was only a three-year school, and then Valmeyer High School for her senior year, graduating in 1938.  She attended Southern Illinois University for two years to receive a teaching certificate.

She taught at the one-room school in Hecker for two years before marrying Burton Stumpf in 1943.  They then moved to Washington, D.C., while Burton was stationed at the Pentagon during World War II. They returned to Waterloo after the war and built their home on Morrison Avenue in Waterloo in 1950. They lived there for 65 years until Burton died in 2014.

Ruth spent her time raising her two children, David and Diane, and using skills she learned growing up – canning and preserving homegrown fruits and vegetables, knitting, crocheting, tatting and sewing, among others.

“I raised the kids and helped my husband,” Ruth said, although her daughter added she also volunteered with her children’s clubs and activities, including being an adult leader for the Brownies.

She also enjoyed playing cards, golf and doing jigsaw puzzles. She was active in the Homemakers Extension for over 50 years and a member of the Monroe County Cancer Board, the Friends of the Library, the Maeystown Preservation Society, Monroe County Genealogy Society and St. Paul’s United Church of Christ.

Ruth moved to Magnolia Terrace a year after Burton died and continues to maintain an active lifestyle.

“I’d like to thank everyone for the kind wishes and cards,” Ruth said of the party, which lasted all afternoon because of the current visitor limit of 10 at a time.

A larger celebration will have to wait for the pandemic to be over and for friends and family to again be allowed to visit the residents of Magnolia Terrace.

She has already received over 130 cards, with more still in the mail.

When asked what the secret to longevity was, Ruth simply said she was “grateful for every day and having people around who support her.”