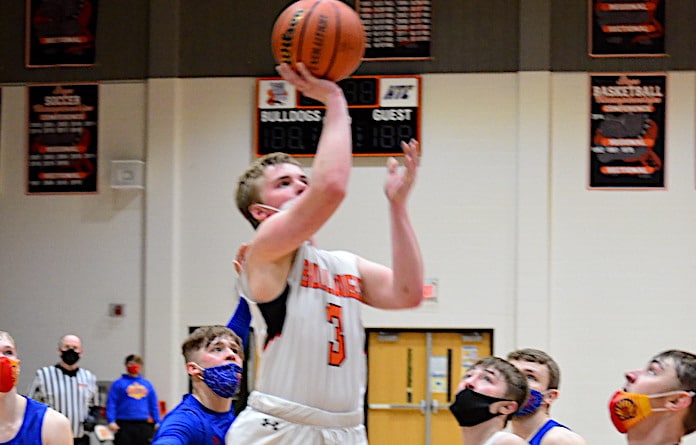 The rejuvenated Waterloo High School boys basketball program picked up another exciting victory on Saturday, 54-52 in overtime over Roxana at home on Senior Night.

And it was only fitting that a senior won it for the Bulldogs. Aaron Eckart, a 5-foot-10 guard, scored on a floater in the lane with 2.6 seconds left in the extra frame.

Ty Lenhardt scored 18 points to lead Waterloo, which fell behind to start the game. Roxana rushed out to a 16-2 lead before the Bulldogs clawed back to lead 20-19 at halftime.

The game was tied at 44-44 after regulation.

For a video of the Senior Night ceremony prior to Saturday’s contest, click here. For photos from the game, click here.

Waterloo, which improved to 5-3 under first-year head coach Scott Spinner, plays at Civic Memorial on Tuesday.

Gibault (3-6) split a pair of games this weekend.

The Hawks went on an 18-5 second quarter run and never looked back in a 63-32 win at Red Bud on Friday. Gibault shot 53 percent from the floor, led by Ryan Bollinger with 19 points and Jude Green with 16 points and 10 rebounds.

The result was much different on Saturday, however, as the Hawks fell to Granite City at home, 60-41. Kameron Hanvey scored 24 points to lead Gibault, which plays at Marquette on Tuesday.

The struggles continue for Columbia (2-6), which dropped its sixth straight on Saturday, 42-41 at Salem. The Eagles were outscored 12-7 in the fourth quarter.

Valmeyer (6-2) continued its winning ways with a 51-28 victory at Marissa on Saturday. The Pirates led 12-5 after one quarter and poured it on from there.

Red Bud was led by Parker Van Dorn with 17 points and Mason Ferrell with 15 points in the win over Dupo.