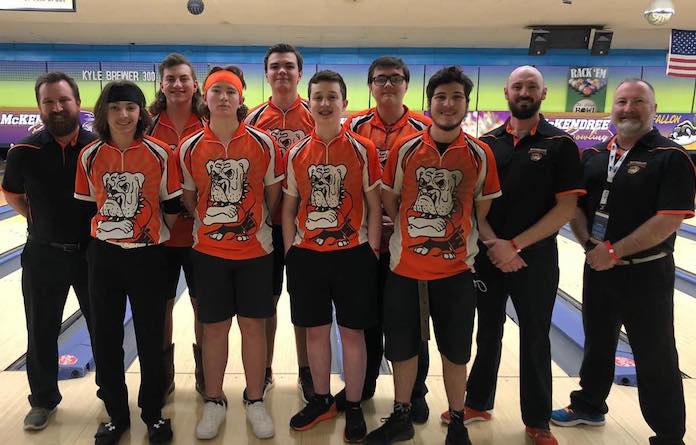 Waterloo High School boys bowling head coach Matt Beck reflected favorably upon what was the most successful season in the program’s 18-year history.

“We left it all on the lanes this year. The talent and time the boys put in led us to the best numbers the program has ever seen,” Beck said.

Beck credits this success from many people and organizations.

“Having a junior high team, coached by Dan Umscheid through (Waterloo Sports Association), has given the bowlers three additional years of experience before they reach the high school,” he said. “Having three coaches at the high school level has also benefited the program, as we are able to have more ideas and eyes on the bowlers.”

“He is very open to new ideas and opportunities for the program and kids,” Beck said.

The head coach also thanked West Park Bowl and Blossom City Bowl for being easy to work with.

This season, Waterloo had the top three per game averages in the Mississippi Valley Conference and most of southern Illinois, and all five starters made first or second team all-conference.

The team broke the WHS record for individual series (808 by DeFosset), individual high average (226 by DeFosset), team game (1,228), team series (3,412) and had seven times this year of scores of 279 or higher during competition.

“Our team average was 1,058, leading all 26 high schools in the metro-east – including larger schools in the Southwest Conference- such as O’Fallon, Belleville East, Belleville West, Collinsville, Edwardsville and Alton,” Beck said.

Waterloo won the top three places in all eight tournaments its participated in this year (with the exception of state), went undefeated in the MVC at 10-0, won regional and sectional championships, and placed 10th at the IHSA State Tournament.

“I was amazed match after match and tournament after tournament to see our success,” Beck said.

While this level of success will be hard to top, Beck said he is excited about what the future holds for WHS bowling.

The Bulldogs will lose seniors Stumpf and Jake Kennedy to graduation.

“We have some talented junior varsity starters that are making great progress,” Beck said. “I am extremely excited to see if the boys can continue to push the limits next year to top the records and accomplishments set by this year’s team.”