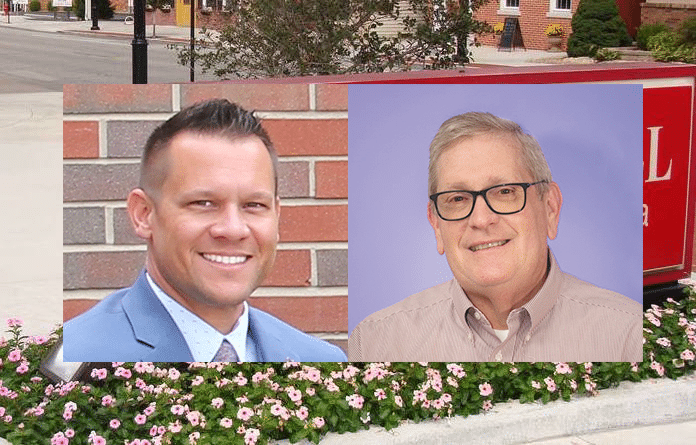 There are two candidates for the office of Mayor of Columbia in the April 6 municipal election.

Monroe County Coroner Bob Hill and Columbia City Clerk Wes Hoeffken are vying for the mayor’s seat held for the past four terms by Kevin Hutchinson, who had announced last fall his intention not to seek another term before resigning as mayor in early March after being indicted in federal court.

Bob Hill, 44, is the owner of Hill Monument Company in Columbia and Monroe County coroner.

Hill earned a bachelor’s degree in criminal justice from Indiana University Purdue University – Indianapolis in 2002 and an associate’s degree in mortuary science from Mid-America College of Mortuary Science in 2004.

“I’m the father of an adult son, Jacob, who also graduated from Columbia High School, following in my footsteps playing football and baseball. I’m proud that Jacob is now taking on additional responsibility at our small, family business,” Hill said.

“My reasons for running for mayor are simple: I’m proud of my hometown and want to be part of its progress. I want the children of Columbia to enjoy the same freedoms I had as a child,” Hill said, adding that he wants to “equip our public safety departments with everything they need to continue to keep our community safe.”

“I want to be a voice for small businesses; as a small business owner, I know how difficult it is to grow a business, especially in these tough times,” Hill continued. “I want to see balanced and thoughtful growth, reducing the tax burden on property owners. I want to partner with our schools and help them maintain their wonderful reputations. I want to encourage more local businesses to take root here. I want to continue infrastructure upgrades.”

Hill also wants to work proactively to “communicate with all community stakeholders – businesses, churches, schools, clubs, organizations and private citizens – to further these goals. Together.”

Hill wants to give Columbia residents a “voice” in City Hall.

“I have the utmost respect for anyone who serves their community, I believe many of our elected officials have been in office for far too long and have forgotten who they work for – the residents of Columbia. I look forward to restoring honesty, integrity, and most of all, transparency to City Hall.”

A key issues facing the city is a search for “balanced, thoughtful growth to be able to continue providing the services our residents enjoy.”

Hill also wants “to continue to keep Columbia safe, and to expand city services and facilities” without adding to the residents’ tax burdens.

Hill says that what sets him apart is his lack of current involvement in city government.

“I hope that the voters of Columbia will agree with me that it’s time for new eyes, new ears, and new ideas at City Hall.”

Wes Hoeffken, 64, recently retired from a career that involved software implementation and development along with application management.

He has bachelor’s degrees in accounting and business administration.

He is currently Columbia city clerk, a position he has held for 23 years. During his tenure in city government, Hoeffken  served five years on the Columbia Plan Commission, seven years as the Columbia EMA Director and is involved with current city planning, participated in the creation of the city comprehensive plan.

He is also a member of the Knights of Columbus, 3rd and 4th Degree.

“I have spent many years serving the City of Columbia in various capacities and want to use my experience and knowledge to lead the city.,” Hoeffken said. “I am familiar with the three primary revenue sources for the city, have a working knowledge of current public works projects, and understand fund accounting required to finance municipal operations.”

If elected, Hoeffken has several goals, immediate goals including “enhancements to the Public Safety Complex, a new facility for the City of Columbia Department of Public Works, increase in commercial development and the evaluation and improvements to the zoning code.”

“Commercial development is paramount to providing tax relief to the citizens of Columbia. The city must evaluate current procedures for attracting new businesses to Columbia, identify what works and what does not, and optimize the process used to attract new businesses.  Columbia must be the preferred location for businesses in the St. Louis Metropolitan area,” Hoeffken explained.

In addition to the key issues of taxes, development and zoning, Hoeffken said the most “critical” issue is “restoring the public’s trust resulting from recent events. The city is at a crossroads that will require someone who can step in and immediately lead the city without impacting city services.”

“As a retiree I have plenty of time to address any city issues that arise daily.  I plan to establish office hours and meet with city staff regularly to address any issues and concerns that arise as part of their normal responsibilities, Hoeffken said, adding that his “time and energy will be dedicated to the city’s business.  Additionally, my 20-plus years of experience in municipal government and managing the activities of the city will allow me to make a difference the first day of serving as mayor.”