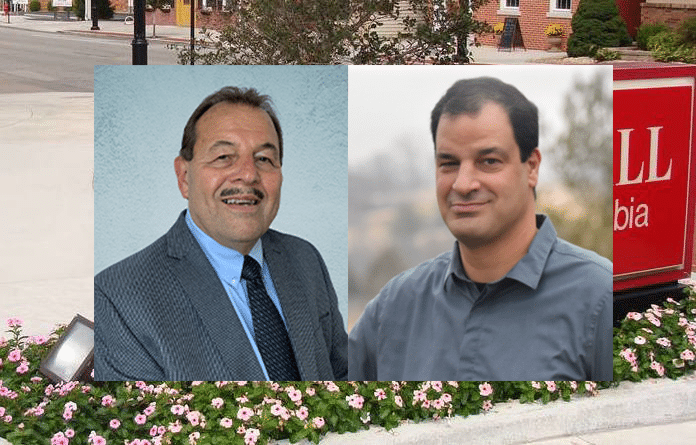 There are three contested races for City of Columbia offices in the municipal election April 6. In addition to mayor, two aldermanic seats are contested.

Gene Ebersohl is seeking re-election as an alderman in Ward III.

Ebersohl was recently elected to serve as mayor  until a newly-elected  mayor takes office in May. As a member of city council, he has served as mayor pro tem on a number of occasions and is currently the chairman of the Committee of the Whole, Executive, Rules, and Public Infrastructure, Municipal Services and Utilities committees chair. He has also served on the   Monroe County Economic Development Committee for a number of years.

Ebersohl and his wife, Lucy, have two adult sons and two grandchildren.

Eversohl served in the U.S. Army for two years and completed a tour of duty in Vietnam and received an Honorable Discharge as a Specialist E-5.

He member of Columbia American Legion Post #581, Sister Cities of Columbia, Columbia Turner’s organization and Immaculate Conception Parish. He has coached in the Columbia Khoury League organization for 12 years.

“I have served in this position for some time and am interested in facilitating projects to completion, such as restarting Old Town Redevelopment (which project  stalled due to state and city budget restraints) to keep up all city real estate property values, to complete all phases of Quarry Road improvements due to new developments and increased traffic, extend walking and bike trails and in general to make the city a great place to live and raise a family,” Ebersohl said.

He sees key issues being “encouraging economic growth to ease the tax burden on current real property owners,” providing great schools and ensuring protection for all residents to include through the police, fire and EMS departments.

“I have the time needed to attend not only regular council meetings, but also available when needed  to discuss various issues with the Columbia City Administrator and department heads. Also, with the election of a new mayor, I will be able to provide experienced background and knowledge  as new challenges and opportunities arise.”

Paul Khoury is looking to unseat Ebersohl. Khoury is the owner and head pharmacist of Khoury Pharmacy in Columbia. He graduated from St. Louis College of Pharmacy in 1997 and has been a Columbia resident for 23 years with his wife, Andrea, who is a lifelong resident. Their  four children, all attend or graduated from Columbia schools.

Khoury is involved with  several organizations and city committees. He is a former Columbia Plan Commission and Monroe County YMCA board member. He is currently treasurer of the Crowder Family Foundation, Columbia Quarterback Club and CHS Multipurpose Field Committee member, is an active volunteer and sponsor with the Columbia school district and a Sons of the American Legion member.

“I am seeking this position because I am passionate about our community. Columbia is a great place to raise a family and own a business, but it could be better. I feel I can make a positive impact here” Khoury said.

“It has become very evident that term limits are needed at Columbia City Hall. Also, it needs to be a place where there are healthy business and residential dialogue/relationships. This open dialogue is something I feel has been lacking for some time,” he continued.

Khoury named key issues being city financial accountability and support for police, fire and EMS departments. He also believes the city should encourage infrastructure maintenance and improvements, including Columbia’s trails and parks and supporting “balance growth in order to reduce tax burden on our residents.”

“I am an independent thinker, reliable, a hard worker, and a quick learner. I will need these four attributes to bring myself up to speed on all thing happening at City Hall. I’m ready to roll up my sleeves and get to work for the people of Columbia.”