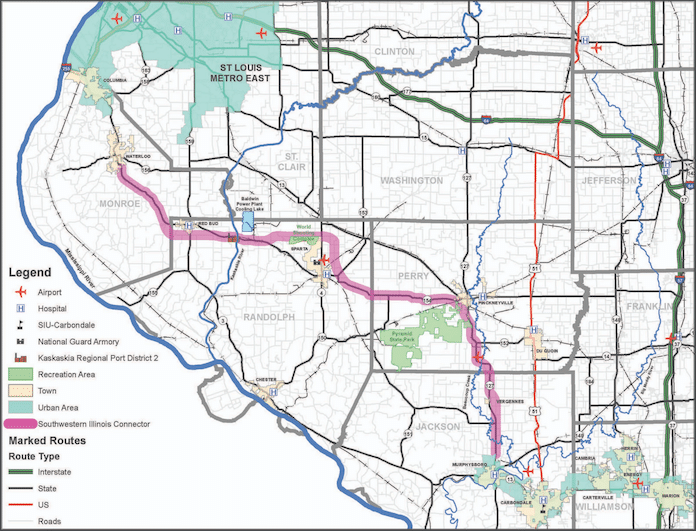 A project to connect the St. Louis metro area with more of Southern Illinois dating back to the 1950s has recently received new attention.

The Four-County Highway Coalition is a collection of officials from Monroe, Randolph, Perry and Jackson counties attempting a new push for the long-awaited Southwest Illinois Connector.

The project centers around a proposed four-lane highway starting along Route 3 south of Waterloo, traveling just south of Red Bud and north of Sparta before rejoining Route 154, turning to avoid Pinckneyville and join Route 127 to Murphysboro.

Murphysboro Mayor Will Stephens was recently selected as chairman of the Southwest Connector Project. He spoke about the proposal’s long history and how it was originally suggested due to the growth of Carbondale and that surrounding area.

“This project really began all the way back in the 1950s, or the concept of it, really with the growth of SIU Carbondale,” Stephens said, “and as it grew, there were various labor leaders and people in the metro east who were coming to Carbondale often and began to realize that there wasn’t a real great, quick connect way to get from one place to the other.”

State Senator Terri Bryant (R-Murphysboro) and other government officials have played a role in revitalizing the project for its most recent attempt.

Bryant and Stephens both spoke about recent efforts made on the project.

In 2018, Illinois Senate Joint Resolution No. 54 was passed to establish the Southwest Illinois Connector Task Force to study the cost, need and other aspects of the proposal.

“For a couple of years, that task force did their work and put together the study,” Bryant said, “and we now have a really good study that we can take in a binder form to the feds.”

More recent work done by the coalition that was formed after the task force has continued to build on that report.

Bryant specifically mentioned efforts on the part of her office to track down an original congressional record from decades ago that could serve to speed up the funding process for the project.

The congressional record, as Bryant says she has heard, contains a permanent authorization for the project that establishes a payment split that would see the federal government paying 95 percent of necessary funds and the state government paying 5 percent for the connector.

“What we’re having to do is go backwards and find this originally because we found what could have been it, but it’s been renamed, there’s new numbers, we’re not sure if it still means the same thing,” Bryant said, “so we’re trying to go back and find the original congressional record to show that it was even done.”

Bryant added that, even if there was permanent authorization decades ago, the current legislature is not bound by previous legislation unless it is enshrined in law.

Bryant and Stephens spoke about the myriad of reasons such a project could benefit the region.

Bryant pointed to one of the most prominent selling points for the highway when it was first proposed: the ability for rural communities to more easily access healthcare in St. Louis.

“We’re a very rural area for medical needs and not really a great way to get to the metro east,” Bryant said.

Stephens said one of the biggest reasons for this highway is the simple inconvenience – and often danger – that traffic on two-lane roads in the area can pose for those trying to get to the metro east quickly.

He pointed to substantial bottlenecks at the Red Bud and Pinckneyville squares as well as major traffic tie-ups farm equipment can cause during planting and harvest seasons.

Stephens also spoke about the number of accidents that can occur on those roads, information that is further described in reports found on the coalition’s website.

“There’s a multitude of reasons why we need to build this highway and have needed to build it for decades,” Stephens said, “and the reasons (then) are the same reasons today.”

Stephens also suggested the additional infrastructure could have a positive effect on businesses in communities along the connector.

“It’s also, no doubt, an economic activity project to boost infrastructure investment in the region, to provide drivers for business attraction. This would go a long, long way,” Stephens said.

While the gears are turning once again for the connector project, it could be a long time before any construction starts.

Along with the issue of funding, Bryant said constituencies along the connector’s proposed route would need to be consulted.

She added that communities in the area could feel quite different about the highway. Previously, Red Bud and much of Randolph County seemed to be positive about the project while Columbia and some of Monroe County seemed less enthusiastic.

“The entities within the Southwest Connector will have to have citizen meetings and allow for citizen input, so we could be 10 years down the road from even turning dirt,” Bryant said.

For more information on the Southwest Illinois Connector, visit the Four-County Highway Coalition website at siconnector.com or call Stephens at 618-363-1308.