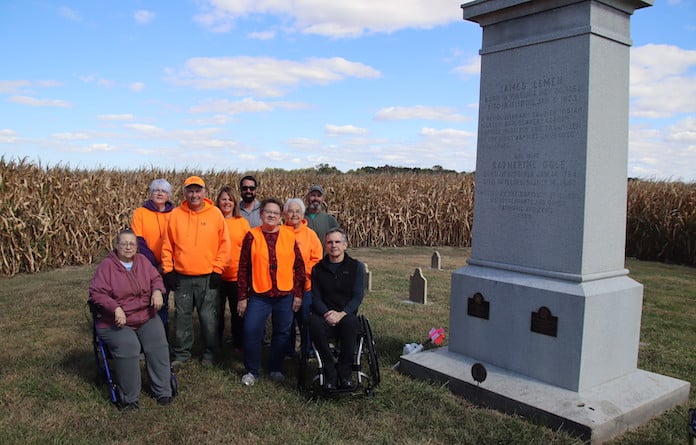 The O’Fallon Cemetery Detectives are having a banner year. The group of volunteer historians recently made a fascinating – and record-setting – discovery just south of Waterloo.

The detectives unearthed 15 gravestones near a monument to James Lemen Sr. and wife Catherine Ogle Lemen, one of which now holds the official title as the oldest intact, legible grave marker recorded in Illinois.

The Cemetery Detectives, a subgroup of the O’Fallon Historical Society, have been repairing broken gravestones and finding forgotten cemeteries for about nine years.

All members of this group are volunteers. They fund the restoration work themselves and through donations.

While they do most of their work in St. Clair County, the members’ interest in local genealogies led them to cemeteries in Monroe County as well as Madison and Randolph counties.

With many pioneers of St. Clair County originating in and around the New Design settlement south of Waterloo, the cemeteries of both counties have a shared history.

For instance, the Cemetery Detectives are responsible for repairing the grave marker for James Lemen Jr. at Bethel Baptist Cemetery in Caseyville.

While Lemen Jr. was born in New Design – his father being the founder of the settlement – his career as a preacher and politician took him throughout the state, and he settled in Ridge Prairie near what is now Fairview Heights.

Another Lemen – William – prompted the group to search the Waterloo area for his missing grave site.

One person keenly interested in finding William’s place of burial is Tim Ogle, one of the Cemetery Detective’s four founding members.

Ogle said the only hint the group has regarding the lost grave of William Lemen is that it is in a cemetery about 10 miles south of Waterloo.

“We’ve been all over looking up records,” to find a possible site of William’s grave, Ogle said. “It’s probably in Renault.”

Before checking farther south, group member Dylane Doerr suggested they look in an area commonly known as the Lemen Cemetery near the Lemen/Ogle monument.

He admitted the discovery was not a complete surprise.

“We knew it had once been a cemetery, but we thought the gravestones had been removed,” Ogle said.

The process of returning them to an above-ground, upright state was completed Oct. 10, but finalizing the project took a little longer than usual.

Among one of the discoveries during the first probe was that of a marker with the inscription, “To the memory of Lemen Tolin who died Nov. 17, 1809.”

The Cemetery Detectives had previously discovered the oldest legible, intact gravestone in a Shiloh cemetery. The year of death was 1814.

Cobb, who helped provide the Cemetery Detectives with the required training in cemetery restoration, called Ogle back with good and bad news.

“She said, ‘Congratulations, it is a new record. Now cease and desist all activity’” at the Lemen Cemetery, Ogle recalled.

Despite the Lemen Cemetery being listed on many guides – and a report of President Harry Truman stopping a train to visit the site – it was an unregistered cemetery and the State of Illinois did not have an official record of its existence.

The group took appropriate steps to make the site an officially registered cemetery. In the meantime, they took measurements and created 14 120-pound concrete bases in which to secure the previously buried markers.

After getting everything in order, and a little more prep work, the Cemetery Detectives completed restoration of a stone which had been in six pieces and secured all remaining grave markers except one, which was too damaged to be repaired.

The work day earlier this month was a celebration in itself, complete with a BBQ grill and hot dog roast.

The group also invited Linda Begole Murray and Michael Murphy to the restoration. Both are direct descendents of James Lemen Sr. and Catherine Ogle.

Murphy drove down from Springfield for the occasion.

Also at the work day was another founding member of the group, Ercell “Babe” Papproth.

Papproth, 87, said she began working with the group because she “couldn’t imagine playing bingo with a bunch of old ladies all day.”

“I like the history side of it,” she said, explaining the group began its work in old family farm cemeteries.

She gave an example of gravestones being destroyed by an unwitting farmer, but also noted one instance of an entire cemetery being relocated during a road construction project due to a history-minded mayor.

“Without people taking an interest in local history – especially the cemeteries people might not know about – it will just get lost for the future generations,” she concluded.

The Cemetery Detectives continue to work to make sure that doesn’t happen.

Ogle said there are probably more markers in Lemen Cemetery and the group will likely do more probing in the spring. Until then, he will remain on the hunt for the site of William Lemen’s grave.

Ogle said the group is always ready for help from history-minded individuals.

To learn more about the O’Fallon Historical Society, visit ofallonhistory.net or find the O’Fallon Cemetery Detectives on Facebook.