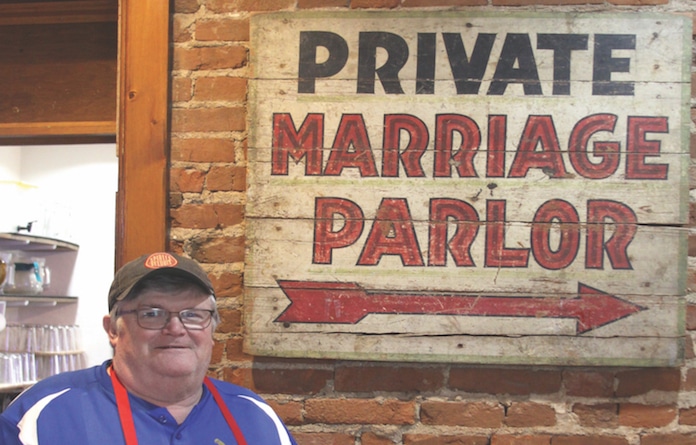 Anyone who has been inside JV’s Downtown Bar & Grill in Waterloo may have wondered about a sign on the wall advertising a “marriage parlor.”

The early 20th century sign is a reminder of a time when Waterloo was a hotbed of quick and quiet legal unions.

This sign was an advertisement for local Justice of the Peace Fred Reitz. He owned a grocery store near downtown Waterloo and operated a marriage parlor in the back of the building.

Many people from the St. Louis area would come to Waterloo for what were then known as “gin marriages.” While not the only city in the area to offer thoee types of marriages – St. Charles, Mo. being another popular spot – people flocked to Waterloo due to the three available justices of the peace and their respective parlors, a guarantee of privacy if desired, no waiting period for licenses and ease of travel access.

An electric streetcar facilitated a majority of marriage customers. It ran along the Kaskaskia-Cahokia Trail from East St. Louis to Waterloo from 1912 until 1936 and brought with it many out-of-towners seeking nuptials in a manner that either required speed or discretion, or both.

Jeff Vogt, owner of JV’s, recalled that his older customers who remembered the era of this streetcar said the amount of weddings made Waterloo “like Vegas” on the weekends.

Waterloo was a hub for gin marriages until a law was passed in July 1937 that required a medical exam within 15 days of obtaining a marriage license.

The now-outdated measure, HB 114, was a “eugenic” law aimed at preventing the spread of venereal disease. It is also considered part of the gin marriage laws that were passed across the country during the prohibition era to discourage marriages by intoxicated couples.

An East St. Louis preacher in favor of this law stated his ire for the marriage practice in Waterloo by proclaiming that Monroe County should be annexed into the State of Missouri.

The law drastically affected the booming marriage business in Waterloo. A 1937 issue of the Waterloo Republican estimated a $15,000 loss of income for the city and county when considering filing fees for approximately 3,000 licenses and other money spent while in town for dining, entertainment and travel. This monetary amount is estimated to be the equivalent of around $280,000 in 2020 when adjusted for inflation.

The three Waterloo justices of the peace were also affected by the law. While Reitz and Joe Sommer, a barber, had established businesses, W.C. Eilbracht performed a majority of the marriages.

Eilbracht was forced to accept a job as an embalmer in St. Louis once HB 114 passed, although a week after the law passed he also said that he had his first vacation in years and “enjoyed his breakfast, dinner and supper as he had never enjoyed it before” due to a lack of customers.

Although the marriage industry in Waterloo is bygone, the sign from this era remains on display at JV’s. Vogt said many recently married couples and wedding parties still visit his place to have their picture taken with the marriage parlor sign.

The sign came into Vogt’s possession 35 years ago when local plumber Bob Limestall was working in the building that housed Rietz’s store. Limestall found the sign in a crawl space and brought it to Vogt’s attention.

Vogt says he will not have the sign forever, promising the sign to one of Aaron Reitz’s sons if he ever closes JV’s.

“Kurt or Kris (Reitz) will get the sign if anything ever happens,” Vogt said.

In the spirit of the marriage parlor days, Uncle John’s RRR Bar at 141 S. Main Street in Waterloo is offering to marry people at its establishment this Valentine’s Day to anyone who has a valid marriage license.

The waiting period for such licenses in Illinois in 2020 is only one day – with no medical exam required.