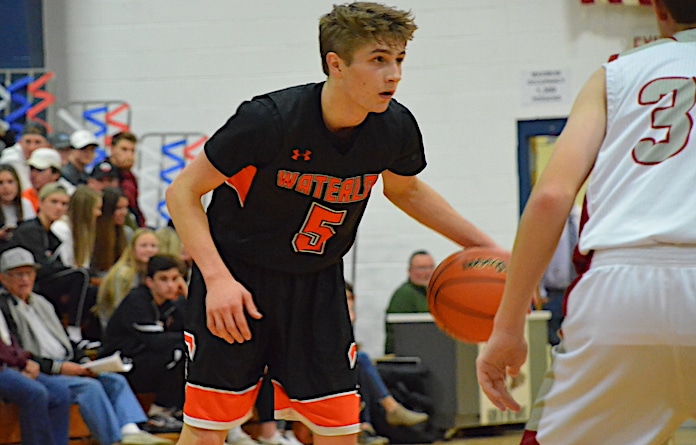 In a tightly contested basketball battle of cross-town rivals, Waterloo won 54-48 at Gibault on Saturday night.

The Bulldogs looked to be well in control early, going up 21-11 after one quarter. The Hawks charged back in the second quarter, with a Will Simonton three-pointer at the buzzer cutting Waterloo’s lead to 33-30 at halftime.

A three-pointer by Gibault senior Gavin Kohnz tied the game at 36-36 at 5:40 of an evenly played third quarter. The Bulldogs led 44-42 entering the final period.

Waterloo, led by Austin Balabas with 14 points, hit key shots down the stretch to emerge victorious.

Waterloo (2-7) lost 70-61 to Jerseyville on Friday night. The game was tied after three quarters, but the Bulldogs ran out of gas late. Five Bulldogs were in double digits, led by Isaiah Campbell with 15 points. He was a perfect 4-for-4 from three-point range.

In other local high school boys basketball action, Valmeyer (6-3) won 57-38 over Dupo on Friday but dropped a 63-56 contest in overtime to Red Bud on Saturday.

Henry Weber (11 points, 11 rebounds) and Philip Reinhardt (11 points) led the way for the Pirates on Friday. Chase Mantz scored 15 points for the Tigers.

Red Bud went on a 20-6 run in the fourth quarter to tie the Pirates at the end of regulation on Saturday. Carter Wiegard led four Red Bud players in double digits with 15 points. Reinhardt scored 27 to lead the Pirates. He made six three-pointers.

On Friday, Columbia (4-4) lost 58-45 to Freeburg. Sam Horner and Jackson Holmes led the Eagles in scoring with 16 and 14 points, respectively.