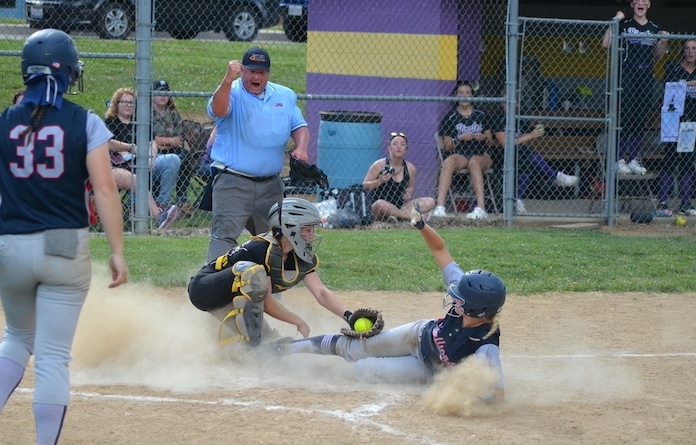 The Valmeyer High School softball squad sought its first sectional championship at home on Thursday, but it was just not meant to be.

Instead, Centralia’s Christ Our Rock Lutheran won its first sectional crown. The Stallions edged the Pirates in a thrilling contest, 3-1.

“I absolutely know that this team was capable of going further in the series, but it just was not in the cards for this year,” Valmeyer head coach Gayle McCarthy said.

Christ Our Rock had three baserunners in the opening inning and loaded the bases with one out in the third but was unable to score both times, as Valmeyer freshman pitcher Brooke Miller worked out of the jams.

“(French) threw a fantastic game,” McCarthy said. “She managed to keep us from reaching bases by throwing some great off-speed and change-ups.”

The Pirates got on the board first in the bottom of the fourth inning. Following a two-out walk to Miller, Valmeyer sophomore Kylie Eschmann hit a bloop single to right. Miller scored all the way from first base to give the Pirates a 1-0 lead.

The Stallions responded with a run in the fifth, however. Back-to-back singles resulted in Valmeyer replacing Miller with junior Aspen Schmidt in the pitching circle. The first hitter she faced, Christ Our Rock’s Mireya Rose, smashed a double that scored one but another baserunner was thrown out at the plate.

In the sixth, an RBI double by Christ Our Rock’s Lilly McKinney put the Stallions on top. They stole another run, literally, when McKinney swiped third on a fake bunt attempt and there was no one covering third base for the Pirates. The catcher’s throw went into left field, scoring McKinney.

Valmeyer got a leadoff single by Brianna Miller in the bottom of the seventh, but the game ended when pinch runner Katelyn Lueck was thrown out at the plate on freshman Peyton Similey’s hit to right.

“We made mistakes tonight that were costly,” McCarthy said. “We were just unable to make up for it with the bats.”

McCarthy praised her pitchers Miller and Schmidt for “keeping a good hitting team in check,” and Similey for being “tough as nails” behind the plate.

“Christ Our Rock managed to get runners on almost every inning, but our defense was able to pull out of many without them scoring,” McCarthy added.

The Pirates ended their season with a record of 14-6 and the program’s first regional title. Many top players return next season, including Miller, Schmidt, Similey and sophomore Markee Voelker.

“Without a doubt, I know that this team will be back,” McCarthy said. “We have so much more to accomplish. History was made in 2021 for Valmeyer High School. But we will make more history. I promise.”

For a recap of Valmeyer’s prior postseason wins, click here.