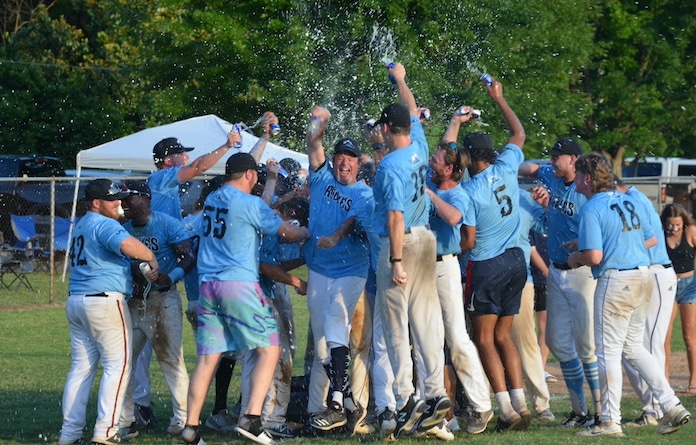 The scene was set for the host Valmeyer Lakers to win the 50th annual Valmeyer Midsummer Classic in front of a festive July 4 crowd at Borsch Park.

Unfortunately for them, the Belleville Rockies spoiled the party.

One particular throwback as part of the milestone event was the use of only wooden bats this year, returning to a practice not implemented in decades.

Behind a “turn back the clock” pitching performance from veteran Mark Mueller and the benefit of shaky infield defense by Valmeyer late in the game, the Rockies edged the Lakers, 8-7, in a thrilling title tilt.

Belleville got on the board first courtesy of an RBI groundout by Jevon Boyd in the opening frame.

The Rockies built on their lead in the fourth inning, plating three more to go up 4-0.

Drew Curtis smacked a leadoff single, which was followed by a strikeout and hit batsman. Kyle McConachie, a recent Columbia High School grad, came through with an RBI single that chased Valmeyer starter Luke Gasser.

Dustin Crawford came on to pitch for the Lakers, and he was greeted by an RBI single off the bat of Pat Gaul. Another hit batsman led to the third run of the inning, which ended when Boyd grounded into a double play.

The Lakers finally got to Rockies pitching in the sixth inning. Easton Wallace drew a one-out walk, as did John Wuelling. They then executed a double steal. With two outs, CHS grad Jonah James came through with a two-RBI single up the middle to cut Belleville’s lead to 4-2.

Valmeyer provided some early July 4 fireworks courtesy of a three-run homer off the bat of Matt Reinholz to go up 5-4 and excite the large crowd filing in to watch actual fireworks at dusk.

The Lakers, who were the visiting team determined by pre-game coin flip, added to their lead in the top of the eighth inning by using some small ball. Ethan Ruff reached on an infield single and Kenny Otero walked. After they executed a double steal, Jacob Rowold walked and Reinholz beat out a double play, scoring Ruff.

In the bottom of the eighth, the Rockies loaded the bases with just one out following an infield error. Boyd then came through with a hit that ended up plating three after the throw got away from the catcher.

Belleville, with its eighth run courtesy of an errant throw in the infield, made it an uphill climb for the Lakers.

Wallace provided one last blast of hope for Valmeyer, smashing a leadoff homer in the top of the ninth to make it an 8-7 contest. Mark Nappier hit a one-out single, but lefty Mike Krumm came on to shut the door for the Rockies.

Mueller, who has pitched several years in the Mon-Clair League, was named MVP of this year’s tournament.

The Rockies enjoyed an exciting tourney from start to finish.

Belleville opened the Midsummer Classic with a Sunday morning contest against the Southeast Missouri Tropics. The Rockies came from behind to win 4-3 in 10 innings.

Following the win, Rockies cleanup hitter Mike Hardin proposed to his girlfriend at home plate – which is believed to be a first in the 50-year history of the tourney.

Also on Sunday, the Millstadt Green Machine shut out the Cape Girardeau Capahas by the count of 5-0 courtesy of a solid pitching effort by righty Andrew Yancik. He had five strikeouts through the first two innings and remained dominant deep into the game.

Millstadt took control of the game in the fifth inning, plating four runs. Hunter Grupe hit a one-out double, then scored on a grounder to third base that resulted in a throw that got tangled between the runner and first baseman. Ben Stedman, who reached on an infield hit, added another run on a bad pickoff play. Tony Kossina reached on a bunt single and Joey Kossina smacked an RBI single. Tony Kossina scored on a passed ball.

In the closing game on Sunday, Valmeyer led the St. Louis Printers, 2-0, after seven innings and the game had to resume early Monday morning due to darkness. The Lakers completed the nine-inning shutout to advance.

Monday’s games were limited to seven innings, except the title game.

The Rockies opened semifinal action with a 5-3 victory over Millstadt. Curtis went 2-for-3 with a homer and two runs scored for Belleville. Teammate Jordan Heckler went 2-for-2 with a run.

Down 5-0, Millstadt plated one in the sixth and two in the seventh to make the game close. John Hilpert went 2-for-2 with a double and run for the Green Machine.

Millstadt’s top three hitters in the order – Tony, Joey and Cal Kossina – were held to just two hits in 11 at-bats and no runs scored against Rockies pitching.

In the other semifinal, the Lakers took care of Waterloo, winning 12-2 in five innings. Ruff went 3-for-4 with three runs and both James and Wuelling added two hits.

Kueper went 2-for-2 with a run for the Buds.

Waterloo had to turn around and play immediately after this loss in the searing heat to battle Millstadt for third place. The result was an 11-1 defeat at the hands of the Green Machine. Waterloo was held to just two hits.

Colin Shea was the offensive star for Millstadt in this one, going 3-for-3 with three RBIs.

On Sunday, Waterloo plays a doubleheader at Cape Girardeau, Valmeyer plays two at Edwardsville, Millstadt hosts the Spikes for a twinbill and Belleville plays host to the Tropics.