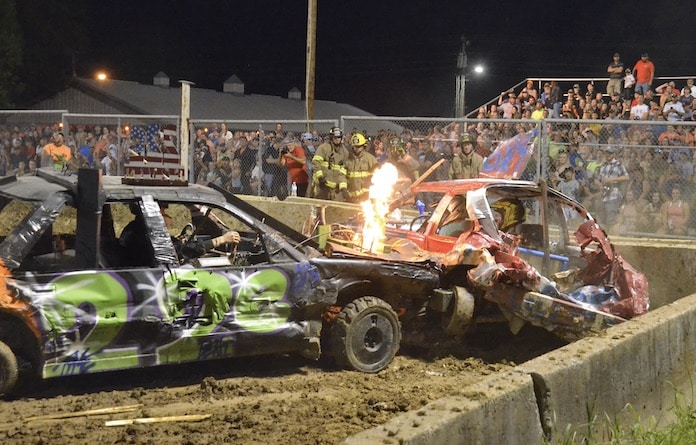 In what was believed to be a record crowd on hand, the 2021 Monroe County Fair Auto Demolition Derby offered fans all the key ingredients of a classic show.

There was plenty of mangled metal, mud, smoke and fire to go along with bone-crushing collisions.

A total of 73 cars competed in this year’s event, which was broken down into four classes.

The Mini-Car Bone Stock event was first, with 22 cars battling out for the top trophy. The pack got whittled down to the No. 15s car driven by Shawn Kelley of Red Bud with rider Amber Kelley and the No. 369 car driven by Matt Wiegard of Evansville with rider Tyler Barnes.

Much to the delight of the capacity crowd, the two cars engaged in a head-on ram fest that was eventually won by Kelley. Joseph Huelsman of Marine won third place in his No. 40 car, also capturing the All-State Mayhem trophy for hardest hit.

Next was a 16-car Full-Size Bone Stock event. The final three in this one were all familiar names in fair derby history. The No. 454 car driven by Patrick Seymour with rider Ashtyn Seymour of Waterloo and the No. 54 car driven by Shawn Seymour ganged up on the No. 42 car driven by Glenn Lutman of Ellis Grove, leading to a battle of Seymours for the title. In the end, Patrick bested Shawn.

The Mini-Car Weld Class featured 17 cars and a bit of a scary situation early on. The No. 22e car of Tyler Ervin struck the No. 6or9 car driven by Gavin Klein of Ste. Genevieve with rider Lexie Franklin and flames erupted on the hood of Ervin’s car in the northwest corner of the arena. Firefighters rushed to extinguish the blaze without injury.

The Mayhem Hit trophy went to Scott Nanney of Waterloo.

For the main event, 18 cars competed in the Full-Size Semi-Stock Class. Multiple instances of fire and smoke followed big hits by these heavyweights, leading to some stoppages in action. When the smoke cleared, the No. 46 car driven by derby veteran Tony Ahrens of Waterloo with rider Austin Gotto bested the No. 901 car driven by Tom Laramore. There was some dispute over who took third place, with the event organizers giving it to the No. 23 car of Hecker’s Andrew Robert over the No. 54 car of Shawn Seymour.

The Mayhem Hit trophy went to the No. 11g car driven by Joe Goodell of Lonedell, Mo.

See a collection of photos from demo derby night by clicking here.