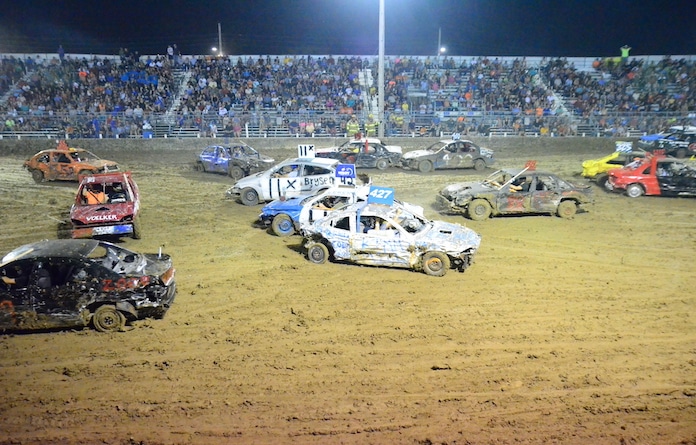 A fan favorite at every Monroe County Fair, Wednesday’s Figure 8 Race did not disappoint the throng of fans in the bleachers around the main arena.

The mud was flying well into the night as 49 cars competed in the small car category and 15 battled in the full-size car division before a three-truck demolition derby concluded the event.

With nearly 50 entries in the small car class, there were four heats and then two consolation rounds prior to a 22-car feature race. After all the smoke had cleared and mangled metal was picked up, the black-and-yellow No. 325 car driven by Bobby Bierman of Red Bud with rider Trevor Barbeau took the top trophy. The No. 76x car driven by Logan Stumpf of Columbia placed second and the No. 36 car driven by Justin Schmitz placed third.

A scary moment during the heat portion of the small car class occurred when the red No. 16 car driven by Tyler Doerr of Waterloo crashed into the concrete barrier near the announcer’s booth and overturned with smoke billowing from the undercarriage. Volunteer firefighters rushed to Doerr’s aid and removed him from the car without further incident.