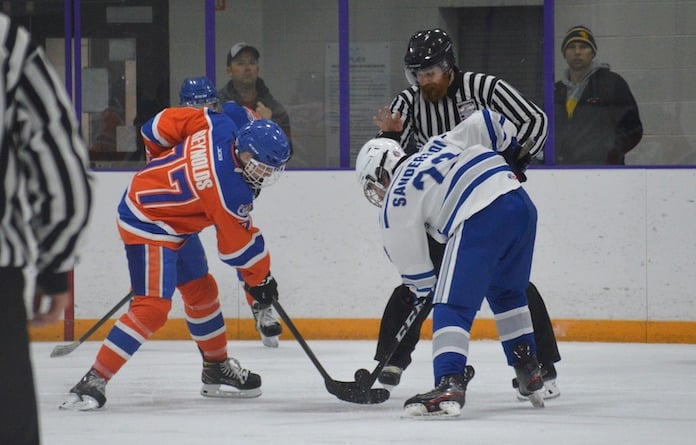 This time the Raging Bulldogs emerged victorious, topping the Ice Eagles by the count of 5-3.

The game was tied 2-2 after the first period. Following a scoreless second period, the Raging Bulldogs outscored the Ice Eagles, 3-1, in the final frame.

Mathew Bushee made 26 saves in net.

On Monday, Freeburg-Waterloo rattled off a 6-2 victory over O’Fallon, sweeping the season series. Ganz had a goal and two assists. Conner Blair added a goal and three assists. Knuckles recorded a goal and an assist.

Ganz sits atop the MVCHA scoring leaderboard with 45 goals and 41 assists this season. Knuckles is third in the league with 36 goals and 17 assists. Blair is fifth with 22 goals and 18 assists.

Freeburg-Waterloo, which has outscored its opponents by the count of 152-46 on the season, battled Edwardsville on Tuesday, winning 12-0. Ganz netted six goals and Knuckles added three. Freeburg-Waterloo will take on Triad this Thursday.

Tim Barbee made 37 saves in net for Columbia, which battled O’Fallon to a 3-3 tie on Tuesday. Reuss, Anderson Judy and Joe Soetaert scored for the Ice Eagles.

Columbia plays Collinsville on Thursday and takes on Vianney this coming Tuesday.

The Raging Bulldogs and Ice Eagles will both be  well-represented in the MVCHA varsity and junior varsity all-star games.

Locals named to the varsity all-star squad are Ganz, Knuckles, Bushee and Brayden Richey for the Raging Bulldogs and Barbee, Sanderson, Soetaert, Collin Schmidt and Liam Ellner for the Ice Eagles.

Locals named to the JV all-star squad are Jason Jarlsberg, Cohin Reynolds and Mikey Gildehaus for the Raging Bulldogs and Reuss, Judy and Camden Ax for the Ice Eagles.

The JV all-star game is Feb. 3 at the East Alton Ice Arena.