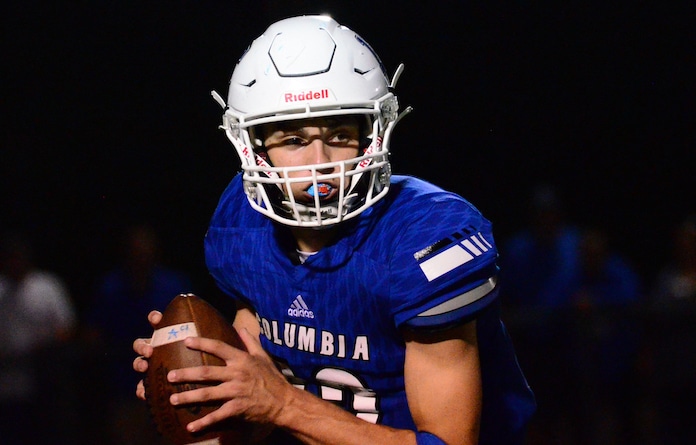 It was a quick turnaround after playing a rare spring season, but local high school football squads provided at least a temporary return to normalcy on Friday nights this past fall.

Here’s a look at this season’s R-T All-Local Football Team, which highlights the top 30 players in this paper’s coverage area.

Dominic Voegele, Columbia. This young man did just about everything for the Eagles. The junior quarterback received All-Cahokia Conference honors after throwing for 893 yards and nine TDs in addition to running for 713 yards and 10 TDs. He also led Columbia’s defense with 85 total tackles (seven tackles for loss) and kicked both field goals and extra points in addition to punting.

Kyle McConachie, Columbia. This senior running back/defensive back scored 15 total TDs for the Eagles, and rushed for 930 yards in addition to 232 receiving yards. On defense, he had 58 total tackles and three interceptions.

Jack McFarlane, Waterloo. This senior running back provided the lightning to Davis’ thunder. McFarlane received honorable mention in the MVC after amassing 778 total yards of offense and nine TDs in addition to nearly 300 total return yards. On defense, he had 43 total tackles, a fumble recovery and an interception.

Logan Stevens, Dupo. A junior running back, Stevens came just one yard shy of rushing for 1,000 yards this season. He also finished with 303 receiving yards and scored 10 TDs for the Tigers.

Owen Brewer and Grant Mathany, Columbia. This pair of senior offensive/defensive linemen paved the way for great things on both sides of the ball. Both earned all-conference recognition. Columbia’s offensive line helped the Eagles rush for 1,700 yards this fall. On defense, Brewer had 60 total tackles and three sacks. Mathany had one sack.

Connor Smitt and Chance Hunter, Dupo. These junior offensive linemen both earned all-conference recognition after helping the Tigers rush for 1,858 yards this season. They’ll anchor a line that should be strong again in 2022.

Jay Mistler, Columbia. A senior tight end/linebacker, Mistler made all-conference with 74 total tackles, five sacks and a fumble recovery in addition to 178 yards receiving on offense.

Sam Denny, Columbia. This sophomore received all-conference recognition for his efforts at linebacker. Denny finished with 47 total tackles, a fumble recovery and interception. He’ll be a force for the Eagles defense going forward.

Ethan Horvath, Waterloo. He earned second team all-conference at wide receiver, finishing with 307 yards and three TDs. On defense, he had 45 total tackles and two interceptions.

Colin Cygan, Columbia. This senior wide receiver/defensive back had scored two TDs and had an interception.

Carter Hicks, Columbia. This 6-foot-5 junior tight end and defensive end had two receiving TDs in addition to 31 total tackles and four sacks for the Eagles.

Brandon Jackson, Columbia. This sophomore tight end/linebacker had 40 total tackles and a sack for the Eagles.