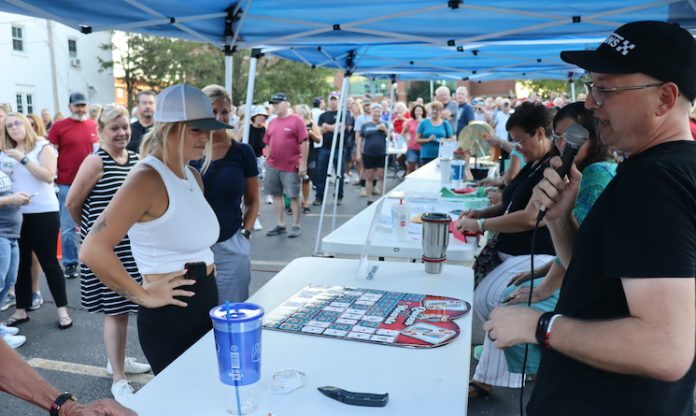 For the past several months, Waterloo residents have been able to see an ever-growing crowd gathering around Outsider on Market Street every Tuesday evening for the now tremendously popular Queen of Hearts drawing.

What started out as a respectable crowd in the tavern parking lot – with a few stragglers scattered on the courthouse lawn – has become a sea of people covering Market Street every week.

The increase in attendees has been driven by a similarly growing pot, with the winnings starting out at a few thousand dollars and now increasing to the most recent potential grand prize of $574,548 last week.

Proceeds from the Queen of Hearts drawing benefit Ss. Peter & Paul Catholic School, with 20 percent of all funds going to the school and the remaining 80 percent going in the pot.

“I think that we knew there was always the possibility of that happening, but now just to see the large amounts of people and the crowd and the number of registrants that we’re getting and the pot growing even more rapidly every week is a bit overwhelming, and it’s a great feeling that we’re able to do what we’re doing and raise money for our school,” Matzenbacher said.

Money from the drawing goes toward the school’s general fund, though Matzenbacher said more specific uses for the current roughly $150,000 raised are currently being considered.

“We have had a running list of things that we’ve wanted completed or things that need to be addressed for the building, so we are adding to that list and generating additional thoughts and ideas for that list,” Matzenbacher said. “When you’re talking that amount of money, it takes some time … we want to make sure the money is well spent.”

Such a large event has naturally had an impact on the community.

Waterloo Police Chief Jeff Prosise commented on the fact the block of Market Street between Outsider and the courthouse has been closed during the last few drawings to accommodate the crowd.

“We just thought it was the safest way to do it with people crossing from the courthouse over to Outsider,” Prosise said.

The drawing has also made a substantial impact on the bar where it’s being held, with Outsider owner Donovan Melican saying, “It started out as something to help the community, and now it’s turned into a pretty profitable thing for us.”

Melican added the tavern has seen plenty of business on Tuesday evenings, but business in general has also been slightly better as some who come in to purchase tickets also find themselves grabbing a drink or playing on the bar’s video gambling machines.

Melican said he’s happy to host the event for the school, and the school has similarly expressed its interest in keeping the event at Outsider into the future.

“They’ve expressed that they’re not leaving, that they’re happy with what we’re doing over there,” Melican said. “Wish I had more room. Wish we could keep people dry and warm, but I’ve kinda got what I’ve got.”

Melican also said that, while he understands having the road closed each week has been inconvenient, he has received mostly positive feedback about the event from the community.

While not as big as the Queen of Hearts drawing, Tuesday evenings at Outsider have also involved a 50/50 drawing that similarly benefits SPPCS.

Shelby Mathes has played a major role in overseeing the drawing each night. He noted the rate at which the drawing has grown, with the most recent one dealing with roughly 40,000 tickets.

“It’s been a steady, real good response with the teachers helping out and some of the parish people selling tickets, but it’s working real good,” Mathes said.

Matzenbacher also commented on the efforts of everyone from the school, tavern and community to put the event together and make the Queen of Hearts drawing as big and successful as it’s become.

“Everyone is just working really hard behind the scenes to make sure that we have enough staff to work, tickets ready, registration cards, helping at Outsiders as often as possible, responding to questions on the Facebook page,” Matzenbacher said.

While the event was put on hold due to the election, the drawing will continue next Tuesday at 7 p.m., with tickets available at Outsider until 6:30 p.m.

Melican addressed various rumors about the game that had been circulating throughout the community.

The first rumor was that the game must end when the jackpot reaches $500,000. Per Waterloo city code passed in December 2017, “a Queen of Hearts raffle shall have a limit of $2 million paid out to the grand prize winner in addition to weekly attendance prizes that shall not total more than $100,000.”

Another rumor was that the drawing would need to be moved to the Monroe County Fairgrounds at some point. Melican said that rumor is false, as the fundraiser is licensed exclusively to Outsider.