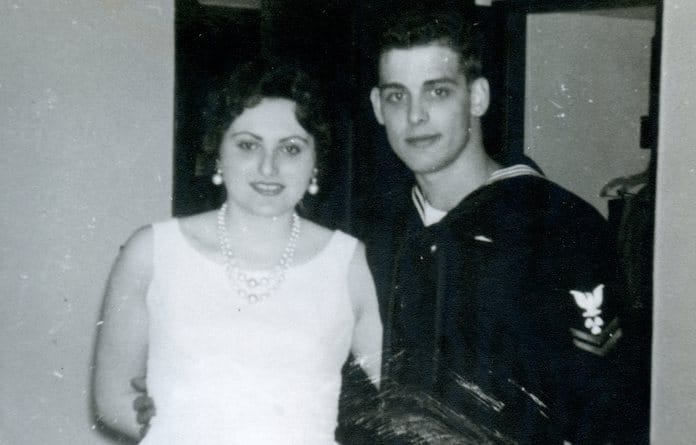 According to history books, the tense two weeks of the Cuban Missile Crisis ended Oct. 29, 1962.

On that day, the Soviet Union agreed to dismantle and remove its offensive weapons in Cuba in exchange for a public declaration from the United States it would not invade Cuba again.

For Jeanette Matlock, who now lives in Waterloo, the real crisis lasted until Thanksgiving.

At the time, her husband and East Carondelet native Darryl Matlock, U.S. Navy Machinist Mate First Class, was aboard the USS Keppler (DDE-765).

The gearing-class destroyer was one of the ships deployed to Cuba in October 1962 to create a “quarantine” of the waters near Cuba to prevent delivery of Soviet ballistic missiles to the island nation.

The USS Keppler was part of anti-submarine warfare Destroyer Squadron 24 based in Newport, R.I., where Darryl was stationed.

“We had no phone and no car – I couldn’t drive anyway – and another Navy wife came by and said, ‘They’re coming in,’” Jeanette remembered.

“One by one these ships pulled in and I ended up being the only one left. I was standing there freezing, 19 years old and eight months pregnant,” she continued. “The only person left was a man in the booth. I asked him what was going on and he said, ‘I can’t tell you, but here’s a phone number.’”

The phone number was for the wife of the executive office of theKeppler. Jeanette said she never would have called if she knew who it was, but she was able to get information about Darryl’s situation.

Jeanette was informed the Keppler had been assigned to escort one of the Soviet submarines back to Russia.

While the woman Jeanette spoke with did not have an exact arrival date, she told Jeanette “They’d better be in by next week. We have a 25th anniversary to celebrate!”

The Keppler did not return in time for the anniversary.

Once the ship finished its assignment near the western coast of Africa, it was delayed by a nor’easter in the Atlantic Ocean.

When Darryl finally arrived in Newport on Nov. 22, the Keppler had been detatched from its unit for about three weeks while escorting submarine C-18 – meaning no fresh food, supplies or outside communication.

Jeanette said he had to climb in the window to get in the house. She was at the hospital accompanying another pregnant Navy wife who had gone into labor.

“Of all the things that have happened in my life, that was the scariest,” Jeanette said of the time waiting for Darryl to return. “It was probably because I was alone.”

Jeanette was no stranger to Navy life, though. She grew up with her father, a World War I Navy veteran, in Norfolk, Va., near one of the world’s largest naval stations. She would frequent nearby U.S.O. events during her teenage years.

After high school, she moved to Brooklyn, N.Y., to be near her father, who had also recently moved.

Her Brooklyn apartment  was near a Navy receiving station, and it was the place she met her future husband, a 21-year-old sailor from Southern Illinois.

“The people upstairs were having a party and invited me over,” Jeanette said. “I took one drink of some terrible wine and left. I thought, ‘This isn’t for me.’”

While her stay was brief, it caught the attention of Darryl Matlock, who gave a message to the host to inform Jeanette he would be taking her out on his next weekend off.

“I didn’t know if he would show up, but I got dressed. He took me to an Irish bar in a cab. I was very impressed,” Jeanette said.

Darryl told Jeanette  that on his next “long weekend” in July 1961, the two would be married.

“He was the first (sailor) I met who was sincere,” Jeanette recollected. “He was a good man. We cared a lot for each other.”

She later met Darryl’s shipmates, brothers Paul and Bill Hancock, also from East Carondelet. Jeanette did not recall if they were aboard the Keppler when it sailed for Cuba.

Then, a little more than a year after marrying Darryl, Jeanette spent about 10 days in Rhode Island wondering if their first child would ever meet his father.

Darryl did return in time for the birth of his first son, Steven Matlock, in December 1962.

After a 20-year career in the Navy, including three supply ship deployments to Vietnam within three years, Darryl retired and moved with Jeanette and their children to Highland to be closer to his family.

Darryl died several years later from complications due to mesothelioma.

While in service, Steven worked closely with the Pentagon, as he still does now as a civilian. Coincidentally, one of his duties had a direct tie to the Cuban Missile Crisis.

Steven was at the Pentagon’s National Military Command Center on Sept. 11, 2001. He was recognized for his work on the “Moscow-Washington hotline,” a system that allows direct communication between the United States and the Russian Federation.

“When (Steven) got the recognition, he told me, ‘That’s because of the missile crisis!’” Jeanette said, pointing out she was pregnant with Steven while waiting for Darryl to return from the same mission.

The “hotline” was created as a direct result of what in hindsight could have been a much more dire situation in the waters near Cuba in October 1962.

It was revealed after the collapse of the Soviet Union in the early 1990s that the Soviet submarines sent to Cuba were equipped with at least one nuclear-tipped torpedo.

The Keppler came very close to being the victim of one of the submarines, Jeanette said.

“I remember reading about it in a book (documenting the Cuban Missile Crisis) and it said, ‘If the Keppler gets any closer, we’re gonna blow it out of the water.’”

As recorded in the U.S. National Security Archive, the captain of a Soviet submarine B-59 came close to doing just that on Oct. 28, 1962.

The submarine had been submerged for days with damaged communication equipment when a U.S. ship dropped depth charges to try to coax B-59 to surface.

One sub’s captain was convinced a war had begun and suggested using the 10-kiloton nuclear torpedo it carried.

“We’re gonna blast them now! We will die, but we will sink them all — we will not become the shame of the fleet!” the translated document reads.

Fortunately, one of the three commanding officers required to launch the weapon refused to approve the attack. Cooler heads prevailed, and Darryl Matlock was able to make it home to his wife after a month at sea.

The couple continued the married life, added a few more children and were stationed around the country over the next two decades.

The final stop before Darryl’s retirement was San Diego.

“I kinda miss the Navy life,” Jeanette, who has lived in Waterloo in the decades since Darryl passed, said in retrospect.

“I’m glad I lived this life,” she added. “I’ve been blessed with a good memory for the things that have happened.”

As Veterans Day approaches, Jeanette’s memory has provided a unique insight into one of the more significant military and political events of the 20th Century.

It is also a reminder of the sacrifices made by the men and women of the U.S. Armed Forces and their families.